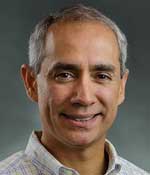 Dr. Asad Khan, CTO Kent Displays and an alumnus of the LCI, is awarded 2017 Prize for Industrial Applications of Physics from American Physical Society for novel contributions to the physics of bistable, reflective cholesteric liquid crystals, and the commercial applications of pressure-sensitive liquid crystal displays, including switchable windows, eWriters and numerous new products. It is our great pleasure and honor to have a recipient of this prestigious prize from our alumni.   Prize for Industrial Applications of Physics is awarded every other year and Dr. Asad Khan is the fifth recipient of the prize since its inception in 2009.  The Prize consists of $10,000 and a certificate citing the contribution for which the Prize was awarded.

The past recipients of the prize include: Dr. John Woollam (2013), well known for spectroscopic ellipsometry, and Dr. Scupratik Guha (2015), leader of the high k transistor technology at IBM Watson Research Center.
The  prize will be conferred at the APS meeting.
https://www.aps.org/programs/honors/prizes/industrial.cfm