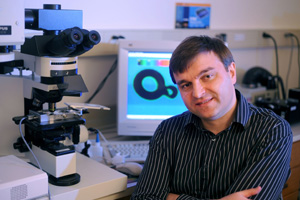 Today, he is assistant professor in the physics departm ent at the University of Colorado at Boulder and a member of the university’s Liquid Crystals Materials Research Center. The Presidential Early Career Award for Scientists and Engineers is the highest honor bestowed by the United States government on science and engineering professionals in the early stages of their independent research careers. Smalyukh is one of only 85 researchers named to receive the prestigious award. He was nominated by the National Science Foundation. This is a second year in a row that a member of the Kent State community received the Presidential Early Career Award.

In January 2010, Dr. Katherine Rawson, an associate professor in Kent State’s Department of Psychology, traveled to the White House to receive the award and meet the president. “I receive this great honor with deep gratitude,” Smalyukh said. “The PECASE award is a strong encouragement for me and for my students and will help us in our future work.” Dr. Oleg Lavrentovich, director of Kent State’s Liquid Crystal Institute and professor of chemical physics, served as Smalyukh’s advisor at the stage of the Ph.D. thesis and again for Smalyukh’s postdoctoral fellowship at the institute. Lavrentovich said it is very rewarding to see a former student and colleague receive this award. “I am extremely proud that Ivan’s innovative research and hard work have been recognized by such a high honor,” Lavrentovich said.

“The PECASE award is well deserved by Ivan who constantly demonstrates research work of the highest caliber and engages himself in disseminating the cutting-edge knowledge to the broader communities of scientists. Ivan organizes numerous international workshops at which the researchers have an opportunity to explore interdisciplinary programs and learn about the most intriguing development of modern science and technology.” Smalyukh credits his experience and education at Kent State with helping him with his career and winning the PECASE award. “My education and research experience at the Liquid Crystal Institute of Kent State University provided a solid background and courage needed for pursuing important and ambitious research goals.” Smalyukh remains connected to and engaged with Kent State. On Oct. 1, 2010, he returned to his alma mater to speak to a student organization he founded. “While working on his Ph.D. in 2002, Ivan founded Kent State’s chapter of the International Society for Optical Engineering (SPIE) and became its first president,” Lavrentovich explained. “It is remarkable that eight years later, this very same SPIE chapter has invited Prof. Smalyukh as a distinguished lecturer to come and present his latest research to the new generation of students and researchers at the Liquid Crystal Institute.” Lavrentovich commented that his group continues to use the experimental techniques developed by Smalyukh during his time at Kent State. He also said that the university benefits from Smalyukh’s accomplishment of receiving the Presidential Early Career Award.

“Kent State’s commitment to excellence in the field of liquid crystals has brought many wonderful achievements over the 45 years of the Liquid Crystal Institute, from the invention of new display technologies to the state of Ohio’s funding of a research cluster of excellence at the LCI,” Lavrentovich said. “The PECASE award to our graduate Dr. Ivan Smalyukh testifies that the LCI’s educational and research efforts fit the highest national and international standards.” For more information on Kent State’s Liquid Crystal Institute, visit www.lci.kent.edu. For more information on the university’s Chemical Physics Interdisciplinary Program, visit www.lcinet.kent.edu/.

Photo Caption:Dr. Ivan Smalyukh is a recipient of the prestigious Presidential Early Career Award for Scientists and Engineers and was honored by President Barack Obama at the White House. Pictured at Kent State University’s Liquid Crystal Institute during a recent visit, Smalyukh is a Kent State graduate and former researcher at the university.