It didn’t matter that they were sitting in the cheap seats high above the court because they were together.

That’s just how brothers are.

The only challenge was that Sam, who had been diagnosed a year ago with congestive heart failure, did not want to take his water pill because he worried about having to get to the bathroom.

That bad decision led to Sam being admitted to the hospital with chest pain and shortness of breath.

As the nurses began treating Sam’s symptoms, Todd was there next to him, just as he had been in the basketball arena. As Sam’s advocate, Todd began peppering the nurses with pointed questions as they assessed Sam’s condition and delivered tough news that he again was facing congestive heart failure.

That was the scenario Kent State’s nursing students were in during a recent exercise as part of the “Todd Tries It” (TTI) initiative where President Diacon immerses himself in an academic or campus activity to further connect with students, staff and faculty.

Sam was actually a patient simulator, but Todd was the real-life brother firing off questions while the junior nursing students at Henderson Hall practiced for the real thing.

Diacon entered the lab with questions such as:

In the end, Diacon said he was impressed by how calm the nurses were under pressure and how genuinely they delivered tough news with compassion. 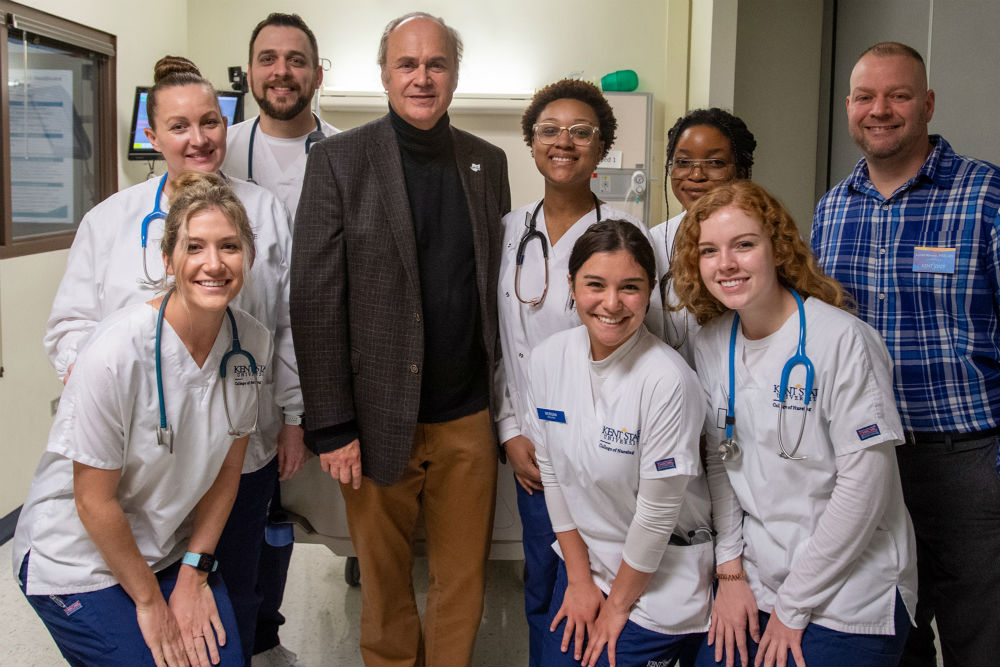 The students will soon join a Northeast Ohio workforce where more than 40% of nurses are Kent State graduates.

Kent State’s College of Nursing offers degrees ranging from BSN to DNP and Ph.D, and the college recently launched a redesigned Ph.D in Nursing program.

Todd Tries It is a continuing series of programs and activities that President Diacon can sample/try that allow him to better connect with students and faculty and that provide insight for presidential communications and content creation.