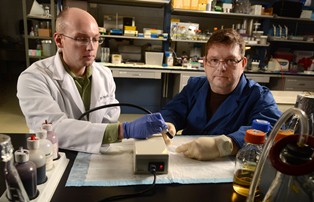 Principal investigator Christopher Woolverton, Ph.D., professor of environmental health science, and James Ferrell, biological sciences graduate student, have been collaborating with Sterionics since 2008. The subcontract to Kent State will extend bench research on the Sterionics device, which uses proprietary technology to kill bacteria.

“Our partnership has not only supported the research and development of Sterionics, but also permitted a Kent State graduate student access to technology and business workings, allowing him to see the inner workings of a small company,” Woolverton said.

Sterionics, a science technology and innovation company, and Kent State have collaborated for several years on developing a product that is aimed at killing bacteria and biofilms, a thin film of bacteria that sticks to a surface. The device also has demonstrated the ability to stimulate skin cell growth. It kills bacteria that cause skin infections while stimulating cells that make up the skin to reproduce rapidly and migrate, which is determined by laboratory testing.

Kent State and Sterionics are currently working on phase one of the project. The goal is to put prototype one to use, further modifying it to make it smaller and to optimize it by “tuning” it for specific applications.

Ferrell said he is optimistic that the results generated from this grant will result in positive data for the phase one proposal and ultimately lead to phase two funding from the National Science Foundation’s Small Business Innovation Research program.

Phase two could eventually lead to controlled animal trials with this technology. The overarching goal of all of this work is to lead to commercialization and advancement of wound care.

“The partnership between Kent State University and small businesses like Sterionics could lead to positive and mutual benefits for both entities moving into the future,” Ferrell said.