The Eren Lab at Kent State University’s Department of Anthropology is among the university’s busiest and most prolific. Unlike the inanimate objects he studies, Metin Eren, PhD, assistant professor of anthropology and director of archaeology in the College of Arts and Sciences, seems to be in a state of perpetual motion—and his students are no different. Here are two of his students’ recent accomplishments:

While a graduate student in Metin Eren’s Experimental Archaeology Lab at Kent State, Ashley Rutkoski conducted an experiment to answer some of archaeology’s oldest questions. 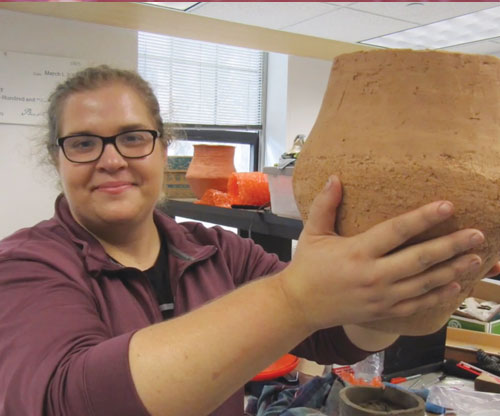 “After stone, ceramic sherds are one of the most abundant things we find in the archaeological record,” Eren says. Sherds are fragments of clay pots that ancient—and even more modern—civilizations used to collect, carry and store food and other valuable resources.

“It’s going beyond typology and trying to gain more information about human behavior, like how pots were discarded and end up in the archaeological record in the first place,” says Rutkoski. “Pots were used, but how they were ultimately discarded is just as important.”

To conduct the experiment, she took the process all the way back to its roots, using raw clay that required months of processing before she could even begin crafting 30 identical pots.

“She then broke every single one over the course of two days,” Eren says. Half the pots were filled with whole kernel corn, while the other half were empty. “There’s never been an experiment where they break the pots like this, and they actually do the morphometrics of the sherds.”

Rutkoski has already gained some insight from early results of her tests. “With full vessels, in comparison to empty vessels, there’s more breakage in the base of the vessel that radiates up to the rim.”

The Eren Lab’s approach is to make replicas of ancient tools and pottery, then break them to study their strength and structural features.

Research always begins with a question. In Metin Eren’s archaeology lab at Kent State University, that question seems to be “Why did they make it that way?” and the answers often seem to defy conventional wisdom. The findings of a study published recently in archaeology’s top journal by a doctoral student in the lab are no different. 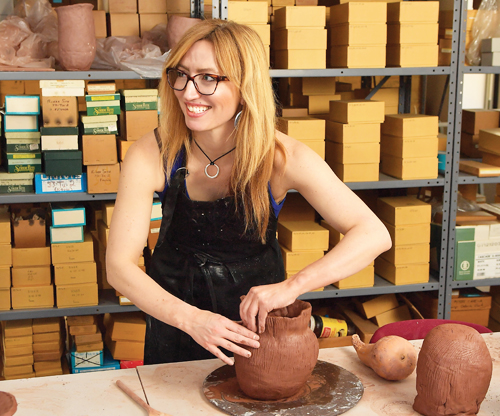 Doctoral student Michelle Bebber, an art and anthropology graduate from The University of Akron, has made ancient pottery a part of the lab’s focus. The Eren Lab’s approach is to make replicas of ancient tools and pottery, then break them to study their strength and structural features.

Bebber’s solo article in the Journal of Archaeological Science presents an argument that pottery was not made the way it was made for the reasons long believed by scholars.

“You want a quality product,” she says. “People in the past, just like people today, had to make decisions about what to include in the recipe for creating pottery.” Ancient peoples would make pottery primarily of clay they dug from the ground, then add crushed stones or pieces of shell called temper.

Archaeologists have long believed this temper was added to strengthen the pottery. In Bebber’s study, she made some pots with the original recipe that included various forms of temper material and made other pots with only clay.

“It turns out that pure clay is almost twice the strength of some of the comparison samples,” she says. “So there must be some other factor that was driving [ancient peoples] to add temper.”

Bebber says it’s likely that the Early Woodland people, who lived well before the pottery wheel, added the temper to help stabilize the raw clay when building by hand. “They were trading end-product strength for workability in that earlier step.”

Eren says Bebber’s single-author publication in a top journal, while no surprise to him, is still an uncommon occurrence for a graduate student. “It’s a huge achievement.”