A Kent State ecologist is part of a global collaboration to answer pressing questions about climate change. 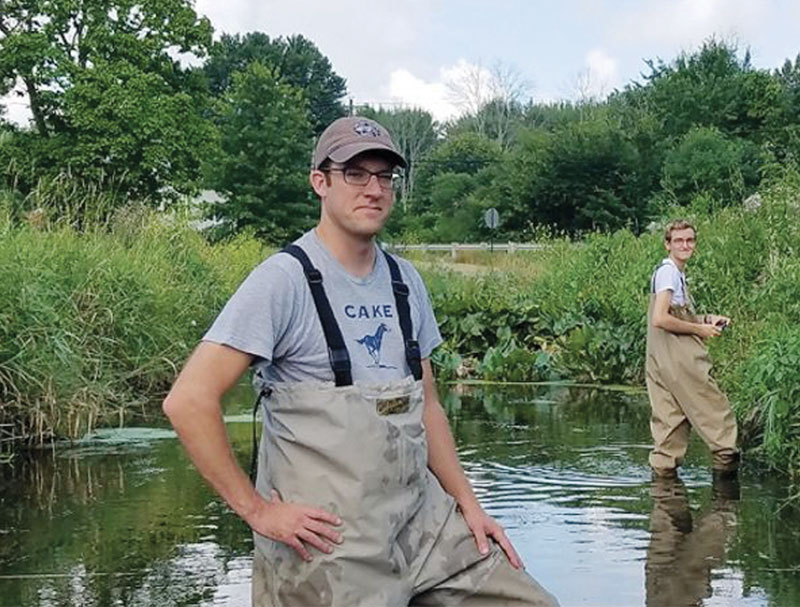 The work of 153 ecological researchers from 40 countries, including Dave Costello, PhD, assistant professor in the Department of Biological Sciences in Kent State’s College of Arts and Sciences, has revealed new findings on the effect of climatic factors on river-based ecosystems.

The findings, published in a recent issue of the journal Science Advances, show that climatic factors, such as temperature and moisture, influence carbon-cycling rates of river-based ecosystems. According to the paper, “Organic carbon that enters rivers and adjacent ecosystems meets one of many fates: It is mineralized and released to the atmosphere as CO2 [carbon dioxide] or CH4 [methane], incorporated into local food webs, or routed downstream to join long-term storage pools in marine or lake sediments. The rate at which organic carbon is processed determines which of these fates predominates and has important implications for the functioning of ecosystems from local to global scales.”

“This is the largest such study, with respect to spatial coverage, and allows us to study carbon cycling in streams at unprecedented global scales,” says Costello, who serves as second author on the paper. “We are able to show how different biomes—large, naturally occurring communities of flora and fauna occupying a major habitat, like forests, deserts and tundras—decompose organic material into carbon dioxide, and we draw conclusions about the susceptibility of these ecosystems to rising global temperatures.”

“River ecosystems play significant roles in the global carbon cycle by regulating rates of decomposition and transporting organic matter to the oceans, but we have only a rudimentary understanding of how decomposition rates vary from river to river,” says Scott Tiegs, PhD, associate professor of biology at Oakland University in Michigan, who led the study.

Unlike most previous studies on carbon cycling in streams and rivers, which used locally collected types of leaf litter to measure decomposition rates, the methodology in this study was identical across all field sites. The study made use of a standardized, easy-to-use cotton strip assay, applied in river channels and along the river banks, to quantify microbial decomposition of cellulose, the most abundant polymer on Earth, the main component of terrestrial plant litter and an important source of greenhouse gas emissions from river ecosystems.

Climatic factors, such as temperature and moisture availability, that govern decomposition of organic material into carbon dioxide are increasingly impacted by human activities.

This standardized assay enabled a large number of researchers to participate in the study. Each research team deployed the cotton strips in four rivers and their adjacent riparian zones (wetlands adjacent to rivers and streams).

“As a result, we were able to quantify decomposition rates in more than 500 rivers across the globe, including every continent,” Tiegs says. “In addition to providing fundamental information on how river ecosystems function, our results provide baseline data that will enable future researchers to evaluate large-scale ecological responses to warming and other dimensions of global climate change.”

“At a given river, the cotton was placed just a few meters apart, yet that boundary between the river and land made a big difference in how quickly the carbon returned to the atmosphere,” Costello says. “In some cases, we predict that leaves falling on land would stay on the soil 10 times longer than leaves falling in the river.”

The paper notes that climatic factors, such as temperature and moisture availability, that govern decomposition of organic material into carbon dioxide are increasingly impacted by human activities.

“There are drastic changes expectedat the poles,” says Costello, whose biggest role in the paper’s manuscript was data analysis. “Our data show that cold temperatures are greatly restricting carbon loss from northern streams, but as the climate warms, the carbon stored in those streams has the potential to be lost to the atmosphere much more rapidly. The expected loss of carbon from thawing permafrost gets a lot of attention, but our study shows that warming streams in these areas may also amplify the loss of carbon from northern biomes.”

Costello’s lab is still generating data from the cotton strips to understand what other factors, besides temperature and moisture, influence decomposition rates. They are studying the role of nutrients (nitrogen, phosphorus and trace metals) on how quickly this carbon decomposes. Early results are showing that the amount of nitrogen trapped by the microbes breaking down the cotton indicates how quickly the carbon decomposes.

The research was sponsored by the Ecuadorian Science Foundation, and the article, “Global Patterns and Drivers of Ecosystem Functioning in Rivers and Riparian Zones,” is posted online.