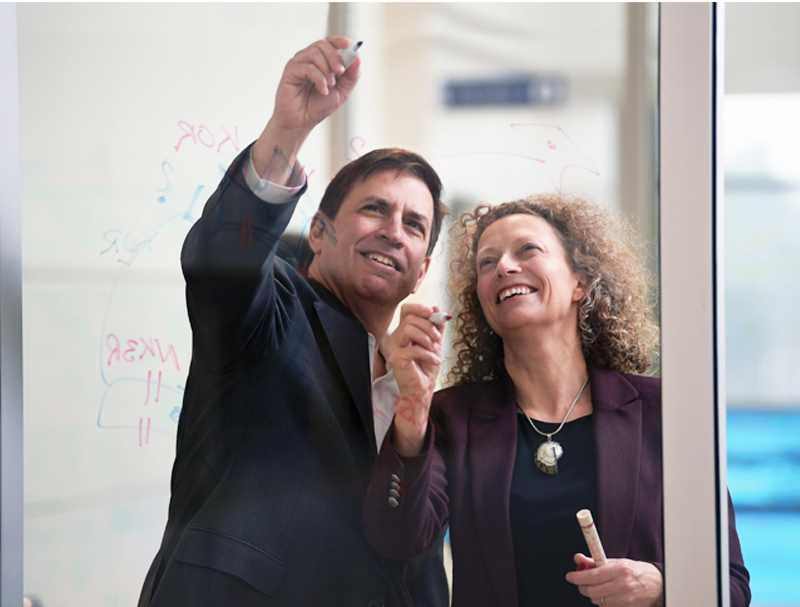 This husband and wife neuroscience team is helping launch a new collaborative at Kent State that aims to make Northeast Ohio a national center for brain health research.

Even with all the advances of modern science, the brain still holds a myriad of mysteries. Two nationally known neuroscience researchers have joined Kent State to continue their quest to uncover the brain’s complex functions—and to collaborate with researchers from a wide range of disciplines at the university and across the region to advance our knowledge of the human brain and translate those discoveries into new treatments and care for brain and nervous system diseases.

In January, Kent State University welcomed Michael Lehman, PhD, as the Brain Health Research Institute’s inaugural director, and his longtime collaborator and wife, Lique Coolen, PhD, a globally renowned neuroscientist, as the associate dean of the College of Arts and Sciences.

Lehman and Coolen have built elite neuroscience programs everywhere they have worked, most recently at the University of Mississippi Medical Center, in Jackson, Mississippi.

The couple recently discussed their research, why they came to Kent State and how their experiences will help them build success here, too.

“To create an institute that bridges with other regional partners in academia and medicine is appealing.” — Michael Lehman, PhD, Director, BHRI

“I want to be at places where I can make a difference,” Lehman says. “That means looking for opportunities where I can contribute in different ways, and this was a unique opportunity.”

He says the vision Kent State leaders presented made it an easy decision. “I was impressed with the neuroscience community here having developed this idea for the Brain Health Research Institute (BHRI), and the senior leadership’s commitment,” he says. “Those things helped me in laying a framework for what I could do.”

Since his days at the University of Cincinnati—where he began his career and eventually became director of UC’s Neuroscience Graduate Program and vice chair for research—Lehman has known KSU and some of its leaders, including James Blank, PhD, dean of the College of Arts and Sciences and also a neurobiologist.

Lehman sees the Brain Health Research Institute as a means to draw in regional partners—including Northeast Ohio Medical University (NEOMED), Cleveland Clinic and Akron Children’s Hospital—to build a network of collaborations that will expand Kent State’s expertise beyond its campuses.

“What I’ve been able to accomplish before as a leader has been within a single university or academic medical center, and to create an institute that bridges with other regional partners in academia and medicine is appealing,” he says. “The other attractive thing is the impressive diversity and breadth of neuroscience research here, spanning not just science-based departments and social sciences, but also arts and humanities.”

Kent State’s research profile appealed to Coolen, too. “It’s a good match. There’s a lot of strength here in our areas—neuroendocrinology, behavioral neuroscience—and the opportunity to have colleagues who work in those areas,” she says. “Being on an undergraduate campus is attractive, as well. We are both educators—in the research lab as mentors and also in the classroom.”

Although Lehman and Coolen will not teach classes at Kent State, they will contribute to the university’s dynamic new neuroscience curriculum, from undergraduate to PhD and postdoctoral training. (In conjunction with the expansion of the Brain Health Research Institute, Kent State’s College of Arts and Sciences will offer a bachelor’s degree in neuroscience beginning in fall semester 2019.)

They also will maintain labs as fully funded researchers. “We’re both passionate about what we do, and we’re both going to continue our research careers,” Lehman says. “In my leadership role, it’s important for me to still be an active researcher so I can continue to relate to the joys of research, as well as its challenges, on a personal level.”

Both specialize in neuroendocrinology and reproduction; Coolen has additional expertise in spinal cord injury and in the neural circuits responsible for drug addiction.

“Lique and I consider ourselves integrative-level neurobiologists,” Lehman says. We’re interested in how sets of neurons and pathways in the brain mediate basic aspects of physiology and behavior.”

The husband and wife neuroscience researchers are perhaps best known for discovering KNDy (pronounced “candy”) neurons—a group of cells that synthesize specific peptides in the hypothalamus, without which mammals are infertile.

Lehman has been consistently funded with at least two parallel National Institutes of Health (NIH) grants for more than 30 years; Coolen for more than 20. Most of their graduate students and postdocs also receive NIH training fellowships, including Aleisha Moore, PhD, who accompanied Lehman and Coolen from the University of Mississippi Medical Center.

Lehman and Coolen work closely, holding weekly joint meetings of all grads and postdocs. “It’s almost like a mini NIH training grant, because trainees get to see different projects going on, different brain systems and learn a lot from what each other are doing,” Lehman says.

In addition to their research and mentorship records, Lehman and Coolen’s résumés boast memberships in several prestigious service positions.

Both are grant reviewers at the NIH and active in the Society for Neuroscience. Lehman just completed a term as chair of the NIH’s Integrative and Clinical Endocrinology and Reproduction (ICER) study section. He is also senior editor at the Journal of Neuroendocrinology; secretary of the international Pan American Neuroendocrine Society; a fellow of the American Association for the Advancement of Science (AAAS), the Society for Experimental Biology and Medicine, and the American Association of Anatomists.

“Kent State neuroscience is based on understanding the healthy brain, and that’s where we complement other universities and institutions in Northeast Ohio whose neuroscience research is more focused on brain disease.”— Lique Coolen, PhD, BHRI

“All of this is about visibility,” Lehman says. “That’s one reason I feel we can contribute here, because we bring a high level of recognition and distinction in our fields.”

Their service also brings experience they hope to leverage to help Kent State generate visibility on its own.

“Kent State neuroscience is based on understanding the healthy brain, and we complement other universities and institutions in Northeast Ohio whose neuroscience research is more focused on brain disease,” Coolen says.

“A goal for the BHRI is to enhance Kent State’s national visibility, so that’s where our ties, our service on national committees, will help to further enhance our visibility and reputation on the national and even international platform.” 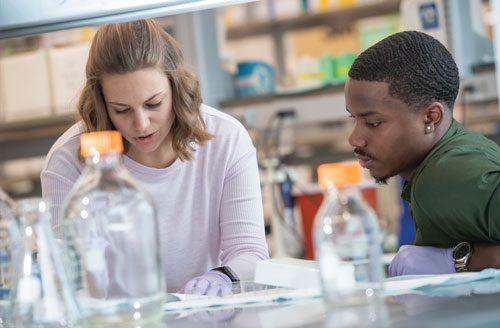 A vital element will be helping faculty develop projects and proposals across colleges and departments and with other institutions.

“One of the goals of the BHRI is research career and development, preparing people in terms of grantsmanship, mentoring for grant prep at multiple agencies like NSF, NIH and DOD,” Lehman says. “Getting researchers from different labs, departments and colleges to submit collaborative grants as multiple investigators is a start for planning larger-scale proposals.”

In this area, more of Coolen’s strengths come in. As associate dean in the College of Arts and Sciences, she is working with Douglas Delahanty, PhD, associate vice president for Research Faculty Development, on a professional development program for faculty and trainees, including grant-writing support.

“This will provide more opportunities to develop things that people would not be able to develop on their own within departments,” Coolen says.

Another part of growing Kent State’s research profile, Lehman and Coolen say, is making the BHRI a hub for partners and peers to learn and interact in multiple ways.

“BHRI is planning its next neuroscience symposium for September 2020, and we’re hoping to attract a roster of internationally recognized neuroscientists for that,” Lehman says. “With the experience that Lique and I bring from organizing international meetings and symposia, we hope to contribute to that effort as well.”

They also are working with the University Library on another resource. “Michael Kavulic, director of Research Strategic Initiatives, and I have been involved with Ken Burhanna, dean of University Libraries, in developing a publication database, and using that to develop metrics that show co-authorships and collaborations, interactions in a Venn diagram, with a regional network approach,” Lehman says.

“It’s useful for us to see our collaborators at other places and find places where there are opportunities we haven’t taken advantage of yet.”

Still to emerge is the completion of the new “terrace” on the lower level of the Integrated Sciences Building, which will provide opportunities for researchers from other institutes and initiatives to collaborate with the BHRI across common spaces and shared equipment.

“For example, the shared core facilities, called ‘collaboratories,’ that we’re proposing to create will be a nexus for multidisciplinary research, similar to [Kent State’s recently launched] Design Innovation (DI) Hub.

“The shared core facilities, called ‘collaboratories,’ that we’re proposing to create will be a nexus for multidisciplinary research.” — Michael Lehman, PhD, Director BHRI

“In addition, together with colleagues in the Advanced Materials and Liquid Crystal Institute (AMLCI) we hope to explore the possibility of growing biomaterials and neuromaterials research beyond what we’re doing right now.”

Ultimately, Lehman and Coolen say, a successful culture comes from successful conversations—in labs and in boardrooms.

“It’s important for us not just to have active collaborations with the other institutes and initiatives, but to be engaged with each other in discussing our policies, best practices and how we interact with departments and colleges,” Lehman says. “In this way, we can collectively have synergistic impact as we work to advance the research culture of Kent State.

“Lique and I are excited to be here. Kent State is a remarkable and distinctive place, and we are delighted to be part of the effort, along with others, to transform the university and its research identity as we move into the future.”