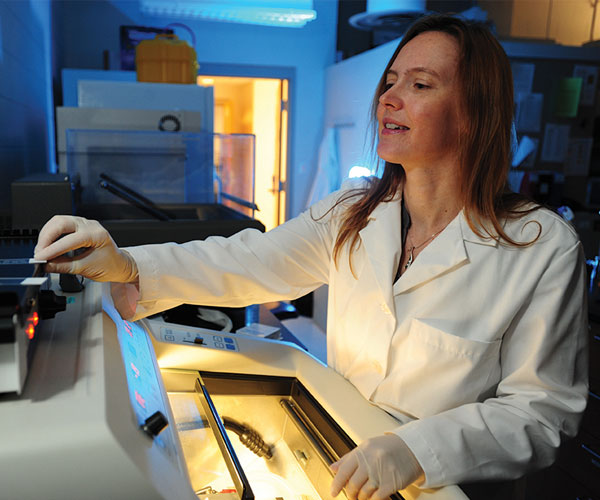 Labeled by some as “the bonding hormone,” oxytocin is well known for helping pregnant mothers with uterine contraction while in labor, milk letdown while breastfeeding and a feeling of euphoria when cuddling with their infants. But there is still much that researchers do not know about how this hormone works in the brains of children.

Heather Caldwell, PhD, professor of biological sciences and graduate coordinator in KSU’s College of Arts and Sciences, recently received a three-year $450,000 grant from the Eunice Kennedy Shriver National Institute of Child Health and Human Development at the National Institutes of Health (NIH), for her project, “Sex Differences in the Developing Oxytocin System.”

Caldwell’s lab group will be the first to examine the function of oxytocin signaling during early development. Elizabeth Aulino, a Kent State PhD candidate in Caldwell’s lab, will focus on this topic for her dissertation. Using an animal model, the researchers aim to determine how the developing oxytocin system differs between females and males and also how it impacts their neurochemistry.

The brain hormones do not themselves cause behavior, but they modulate it. The key is how they interact with a receptor, in this case, a protein in the cell’s membrane. The developing mouse brain does not make oxytocin early in development, but it has oxytocin receptors ready to signal.

Emerging evidence shows that, during early brain development, oxytocin helps to organize neural circuits in the brain and that these organizational effects may help the brain develop the capacity to execute sex-specific and context-appropriate social behaviors later in life.

Oxytocin is important for social cognition and social functioning.

“We think these experiments will reveal a novel role for oxytocin in organizing sex-specific brain circuits that are critical for typical displays of social behaviors,” Caldwell says.

“Across mammalian species, oxytocin is important for social cognition and social functioning, and deficits in social behaviors are characteristic of several neurodevelopmental neuropsychiatric disorders such as schizophrenia.”

This R15 NIH grant, an Academic Research Enhancement Award (AREA), encourages the research, education and training of future scientists through undergraduate research support for students interested in a career in biomedical/behavioral science. Caldwell is recruiting students to collaborate with her and Aulino, as well as a technician for the three-year term.