Fighting Cancer on a Molecular Level

Kent State is becoming a leading authority on a genetic structure that plays a critical role in the growth and replication of cancer cells—the G-quadruplex.

In molecular biology, nucleotides are organic molecules that form the basic structural unit of nucleic acids such as DNA. The G-quadruplex is a secondary structure formed in DNA nucleotides with high amounts of guanine, one of the four constituent bases of nucleic acids. Such nucleotides are found at the ends of DNA strands in human chromosomes. Also found at the end of every double-helix DNA strand is a single-strand tail called a telomere, formed by thousands of nucleotides in a repeating sequence—GGGTTA.

Every time a normal human cell divides, some nucleotides are lost and the tail shortens. If it reaches a critical length, the cell stops replicating (senesence) or dies (apoptosis). Cancer cells, however, can replicate quickly without dying because of a protein called telomerase. This protein lengthens telomeres as cells divide, preventing cell death.

Two KSU researchers are exploring how to stabilize G-quadruplexes, and they each have won federal funding awards this year for their studies in relation to cancer treatment: 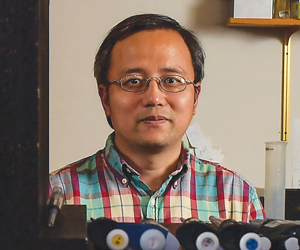 Recently, the National Institutes of Health (NIH) awarded a four-year, $344,500 grant to Hanbin Mao, PhD, professor of chemistry and biochemistry in Kent State’s College of Arts and Sciences, for his project, “Specific Recognition of G-quadruplexes.”

“We want to look at what we can use to stabilize the G-quadruplex,” says Mao, who combines analytical chemistry and single-molecule biophysics in a new interdisciplinary field called mechano-analytical chemistry. “We’ve designed experiments to evaluate the small molecules that can bond to this G-quadruplex and interfere, hopefully,  to stop the growth of cancer.”

Among myriad approaches researchers are taking in the fight against cancer, telomerase targeting has been effective in killing cancer cells, and several drugs based on this model are being tested in clinical trials. So far, however, these approaches only yield a fatal shortening of telomeres in cancer cells after an extensive lag unsuitable for therapeutic applications.

Mao seeks to solve this problem by testing new compounds that inhibit transcription of the enzyme that supports telomere extension, known as human telomerase reverse transcriptase (hTERT), through specific binding of G-quadruplexes (GQs) formed in the hTERT promoter.

His recent findings show that inhibition of hTERT transcription kills cancer cells within days by interfering with the fundamental telomerase activities that, among other functions, avoid apoptosis. “Our objective is to reduce production of this enzyme by stabilizing the G-quadruplexes that form in the hTERT promoter region.”

G-quadruplexes are known to block telomere extension, which can make cancer cells obey the normal laws of cell life and death. 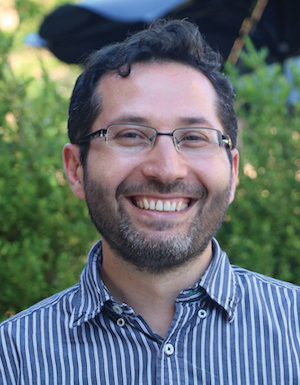 Earlier this year, the National Institutes of Health awarded Hamza Balci, PhD, a molecular biophysicist and associate professor of physics in Kent State’s College of Arts and Sciences, a three-year $437,600 grant for his project, “Influence of Small Molecules on G-quadruplex Stability, Folding Kinetics, and Interactions with Proteins.”

Balci’s focus lies with the G-quadruplexes that form on regulatory cells. These cells determine whether or not a specific protein will be expressed, and how much of it to make. The stability of G-quadruplexes allows them to act as roadblocks, and they most often prevent protein expression, including that of telomerase in cancer cells. However, as noted previously, certain proteins in the body can cause G-quadruplexes to break down.

“Being able to see individual molecules and watch in real time how they work, gives us a lot of information on what type of mechanism the protein uses to destruct the G-quadruplexes,” Balci says.

“We put these molecules on a surface, and we image them with single molecule fluorescence microscopy, so we can see individual molecules and their behavior. You get a more detailed, accurate picture. We take those molecules and conduct measurements with other small molecules, and study the stability against the protein that these small molecules induce in the quadruplexes.”