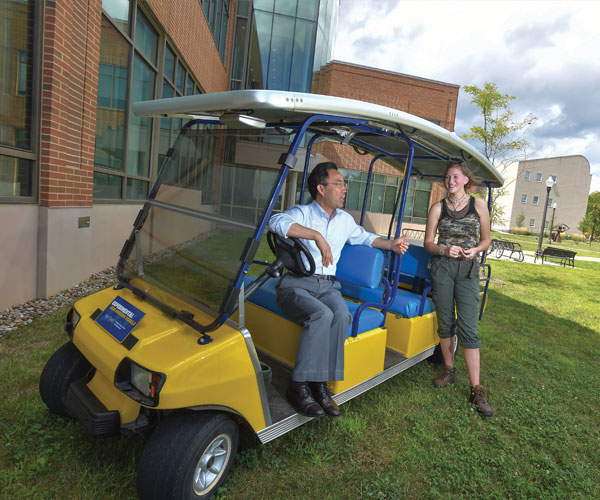 The UN Intergovernmental Panel on Climate Change (IPCC) released a report in October 2018, warning that mankind has about a decade to avoid permanent, dramatic weather changes due to global warming. According to the report, the world’s percentage of electricity from renewable energy such as solar and wind power would have to jump from the current 24 percent to about 60 percent.

This sobering reality makes the research of Yanhai Du, PhD, associate professor of applied engineering and technology at Kent State’s College of Aeronautics and Engineering (CAE) even more relevant for today’s world.

The team leader and principal investigator of Kent State’s Fuel Cell Program, Du has received more than 1.5 million dollars in grants for various clean energy projects over the past six years, including the largest grant award in CAE’s history in 2017 when the US Office of Naval Research awarded him $485,000 for his “Laser-Sintering System  for Research on Additive Manufacturing of Advanced Fuel Cells.”

Du’s vision for the funding is being put into motion, with plans for creating a new laboratory to house a 3D metal printer, one of the top breakthrough technologies in 2018. The equipment will complement the college’s Stratasys Objet260 Connex3 3D polymer printer, purchased with a grant from the state of Ohio.

“This new equipment will enable us to use cutting-edge technology to 3D-print advanced high energy efficiency fuel cells,” Du says. “Our students will use this equipment, in part, to create fuel cells.”

Ohio is among the top five fuel cell states in the nation, and Du gives Kent State students hands-on experience working with fuel cell designs and putting their creations to work.

The Zero Emissions Vehicle (ZEV), a student-led project, turns heads as the vehicle’s fuel cell power propels it through the Kent Campus.

The ZEV is a repurposed six-seater golf cart with an electric engine powered by three sources: a fuel cell, solar panel and batteries. The fuel cell efficiently converts fuel, such as hydrogen or natural gas, into electricity with no greenhouse gas emissions. The solar panel on the cart’s roof charges the batteries all the time.

When the cart is resting or the batteries are fully charged, the electricity generated by the solar panel can be used to electrolyze water into hydrogen and store the solar energy for later use.

Angela Deibel, a marketing and engineering double major, has been team leader on the ZEV for the past three years, after interning with Du in the Summer Undergraduate Research Experience (SURE) in summer 2016.

“Renewable energy is the future,” says Deibel, who credits Du with giving her the opportunity to explore sustainability and engineering, while sustaining her passion for marketing. “The biggest thing is to get students into research,” she says. “Getting into it early on propelled me.”

“Students’ involvement in research doesn’t only enhance their learning and apply their knowledge—it’s a platform for inspiration, a channel to success in life,” says Du, who received an Outstanding Faculty Award in 2019 from Kent State’s College of Aeronautics and Engineering and the President’s Faculty Excellence Award in 2018.

Learn More About the ZEV