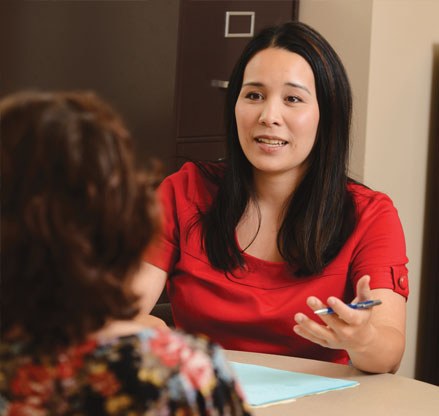 The US Centers for Disease Control and Prevention report that about 21 percent of children ages 12 to 19 are obese, and lower socioeconomic groups are almost twice as likely to suffer.

“If you look at the literature on weight loss in teenagers, and specifically low-income teens, outcomes are relatively poor,” Sato says. “The question is if there is a variable that hasn’t been specifically targeted. Our premise is that stress is the variable.”

Obese teens and adolescents from lower-income families face myriad challenges to maintaining healthy diets, Sato says. While they may face stress like neighborhood violence and food insecurity, they also have access to less healthy foods. She adds that stress causes the brain to release cortisol, which drives cravings for high-fat, high-sugar foods.

“It’s a perfect storm, setting them up to be less healthy,” Sato says. “Our goal is that mindfulness intervention will help with the stress piece.”

Mindfulness is defined as a mental state achieved by focusing one’s awareness on the present moment, while calmly acknowledging and accepting one’s feelings, thoughts and bodily sensations.

In previous experiments with the same population, Sato’s lab found that teens who report feeling less mindful typically have a higher body-mass index (BMI), and report higher levels of stress and emotional eating.”

The intervention is an 8-week mindfulness-based stress reduction model developed by Sato’s colleague, Elissa Jelalian, PhD, professor of psychiatry and human behavior and professor of pediatrics at Brown University, a co-investigator on the grant. Also participating in the project are David Fresco, PhD, and Manfred van Dulmen, PhD, both professors of psychological sciences at KSU, and Shirley Moore, BSN ’74, PhD, RN, FAAN, professor of nursing at Case Western Reserve University.

The first stage of the project is forming a youth advisory board. “We want this model to feel relevant to teens and get their feedback on how to develop it for them,” Sato says. They will then pilot the model with small groups, revise again, and proceed with randomized control trials.