During the 2017 academic year, Kent State University was invited to participate in the “Extraordinary ICE Building Design Competition,” organized by the prestigious Harbin Institute of Technology in China and Working Group 21 of the International Association for Shell and Spatial Structures. 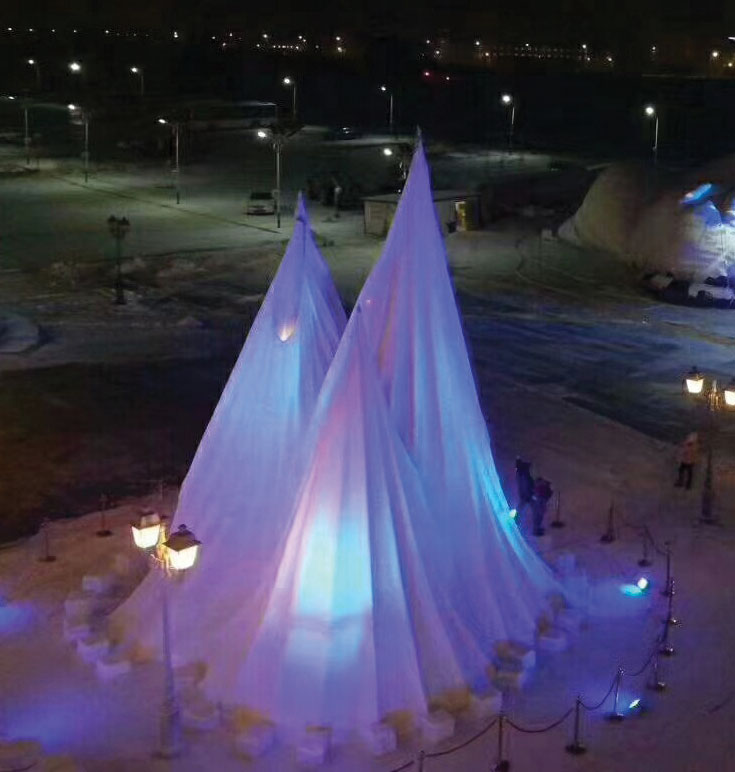 Although the timing was tight—participants were given two weeks to design and submit proposals for a 100-square-meter ice pavilion—Kent State put together a design team of 14 students from the College of Architecture and Environmental Design (CAED), led by Mark Mistur, AIA, dean of the college, and Rui Liu, PhD, assistant professor of architecture and environmental design.

The Kent State team developed two separate designs: “PNEUMAT-ICE,” which received an excellence award, and “THRICE,” a fabric structure of three asymmetrical cones, which was one of six designs selected for full-scale construction in China, and the only one from the United States.

The team turned to J.R. Campbell, MFA, then director of Kent State’s School of Fashion Design and Merchandising, and Vincent Quevedo, MFA, associate professor of fashion design, who helped select and sew the fabric.

Before heading to China, the team tested the prototype on the Kent Campus, then 12 students and professors Mistur and Lui traveled to Harbin to replicate the structure in temperatures dipping below 15-degrees Fahrenheit.

The team took top honors in the first round, earning them international distinction, and while there, three of the Kent State students took second place in Harbin Institute of Technology’s Snow House Competition.