The Black Experience in Design

The summer of 2020 was filled with tension and a desire for justice. In the wake of George Floyd’s murder by police officer Derek Chauvin, Black Lives Matter protests grew from a local response in Minneapolis to a global movement. Tensions around the world were running high and the COVID-19 virus continued to spread. As these events played out, two alumnae from Kent State University’s School of Visual Communication Design’s M.F.A. program began having conversations about the experience of Black designers, artists, educators and others. 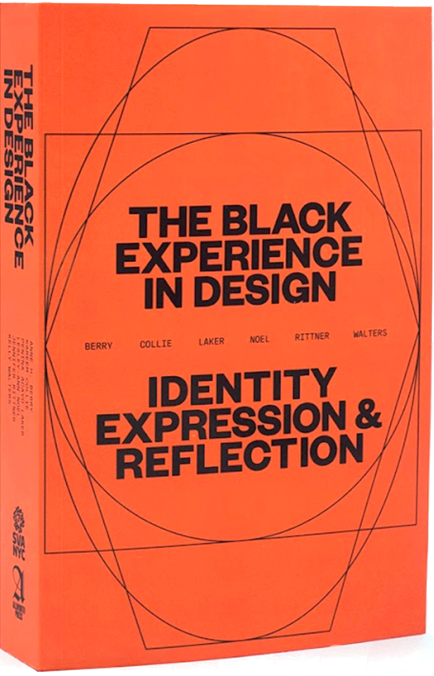 According to Berry and Laker, the book was born out of a series of conversations that were a reaction to the events occurring during the summer of 2020. The Black Lives Matter movement protests, heightened racial awareness post George Floyd’s death and trying to maintain normalcy during a pandemic are all contributing factors to the conversations that led to the creation of The Black Experience in Design.

Initially, Berry proposed the idea of a special issue academic journal. However after considerations, research and collaborations, it became clear that a journal would not encompass the flexibility and broad scope that they desired. As a result, they landed upon the decision to create an anthology which would encompass over 65 different perspectives. Penina elaborated that writing such a large anthology was no easy task, especially for a small pair. The creation of this book was a collaborative effort between the editorial team, creative team and co-editors.

“We wanted to be able to reach, among other audiences, design students, practitioners, and educators regardless of what stage they happened to be art in their careers,” Anne Berry said. “An anthology provides many more entry points for people reading the book.”

“The Black Experience in Design: Identity, Expression & Reflection presents the work of six editors and over 70 designers, artists, curators, educators, students, and researchers who represent a wide cross-section of Black diasporic identities and multi-disciplinary practices." – https://blackexperienceindesign.com

The nature of design can be considered multidisciplinary and collaborative. This book focuses on providing a range of perspectives, spotlight teachings, practices, research stories and conversations from a Black/African point of view. The Black Experience in Design exemplifies the idea of meeting people as they are and wherever they are in their knowledge about design.

“This 600-page book is just a small fraction of the many ideas, perspectives, reflections and experiences of black designers,” Laker says.

Berry and Laker both came to Kent State University seeking to build stronger connections to their design education. As undergraduates, both individuals felt unprepared to enter the professional workforce. However, after spending time in the VCD Master of Fine Arts program at Kent State, both authors graduated with skills and knowledge that they credit with helping them discover their career paths.

“At Kent, the graduate experience afforded me the community, mentorship and environment to think about my identity as a designer,” Laker says. “It was at Kent that I started to uncover how I wanted to shape the rest of my career.”

Both Berry and Laker attribute some of their success to their former professors and other individuals at the university. According to both authors, the skills they learned while in the VCD graduate program are skills they still use in their work today.

Berry says, “From the late Eric May I learned patience. He also helped me develop a sense of confidence in my abilities through creative play, i.e., letterpress, calligraphy and hand lettering, and embracing trial and error. And he saw potential in me as an educator that I did not see in myself at the time.”

Laker highlights that the skills and concepts that are still applied to her own work today were learned in a graduate studio course with Professor Ken Visocky O'Grady. Laker states, “I learned my first lessons of the value of empathy, collaboration and compromise when it comes to executing design in the social impact space.”

Berry and Laker hope The Black Experience in Design reminds readers that there is no single “black experience” in design. Their 600-page book encompasses numerous ideas, perspectives and experiences. Berry states, “I hope readers come to appreciate the diversity of experiences and perspectives within the larger so-called ‘black identity.’ The title of the book is an intentional paradox or oxymoron in that way; we as Black people know how diverse we are, despite how we may be portrayed or perceived, so this is our opportunity to speak to our varied ways of being, thinking and working via the lens of design and other creative disciplines.”

Listen in on a conversation about The Black Experience in Design from Open House New York on Vimeo.