In the late 1980s, the Ohio state legislature recognized the value in fostering arts and culture and supporting artists and craftspeople. They acted on this belief by passing the Percent for Art law which went into effect July 1, 1990. This law provides funding for acquiring, commissioning and installing works of art in any new or renovated public building whose appropriation exceeds more than $4 million.

Decades later, this law would come into play when the 2019-2020 Ohio state budget provided funding to create an innovation and research hub focused on advanced manufacturing. And so was born the Mahoning Valley Innovation and Commercialization Center (MVICC) in downtown Youngstown, Ohio, and, as part of the project, a call was put out for artists.

One who answered this call and won the commission was Associate Professor Jaime Kennedy at Kent State University’s School of Visual Communication Design.

Kennedy’s work and teaching revolve around using current digital technologies to expand upon the aesthetic and conceptual possibilities of photography. His own works are digital constructions that blend illustration, sculpture, photography and printed text which are then later printed using historic photographic processes and techniques. 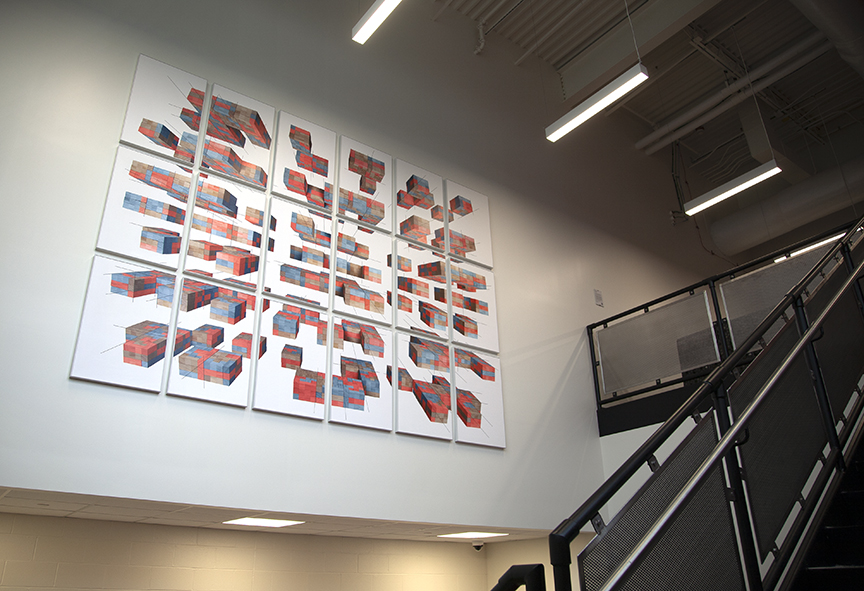 The pieces Kennedy created for the MVICC are no exception to this aesthetic. Alluding to the robotics and 3D printing courses taught in MVICC, for his first work, Kennedy printed the word “Progress” using a 3D printer. The resulting piece was only about 4 inches long by 1 inch wide and half an inch tall, but it was the process of creating it that was important.

Since the commission was for a building dedicated to learning and labor, it was the process of creation that inspired Kennedy’s mural installation. He recorded the sounds of the 3D printer at work then took those sound files home and loaded them into Adobe Audition, an audio editing software that allowed Kennedy to see the audio file as a waveform. After isolating the sound of the printer from ambient sounds, Kennedy created a baseline number and each time the sound wave file peeked over the baseline, he recorded that data.

The formula he created was then plugged into a planned structural blueprint that calculated and slotted bricks into grids. The grids were in three columns corresponding to the letters PRO-GRE-SS. The columns were then divided into seven rows for the days of the week, subdivided into five workdays per row, three shifts per workday and then each cube corresponding to hours in the day. Larger segments were chosen from classic shapes used in the brick stacking game Tetris.

Having his plans mapped out, Kennedy then built a scale model of the structure using a plexiglass rack for support and he added in tiny wooden cubes. Each cube was colored based upon a random throw of the dice.

With the colors applied and the bricks stacked in their workday/work shift forms, Kennedy then took photos of the model and used those as the basis for the final piece which measures 12 feet by 9 feet and is printed on 18 large canvases, each measuring 2 foot by 3 foot. 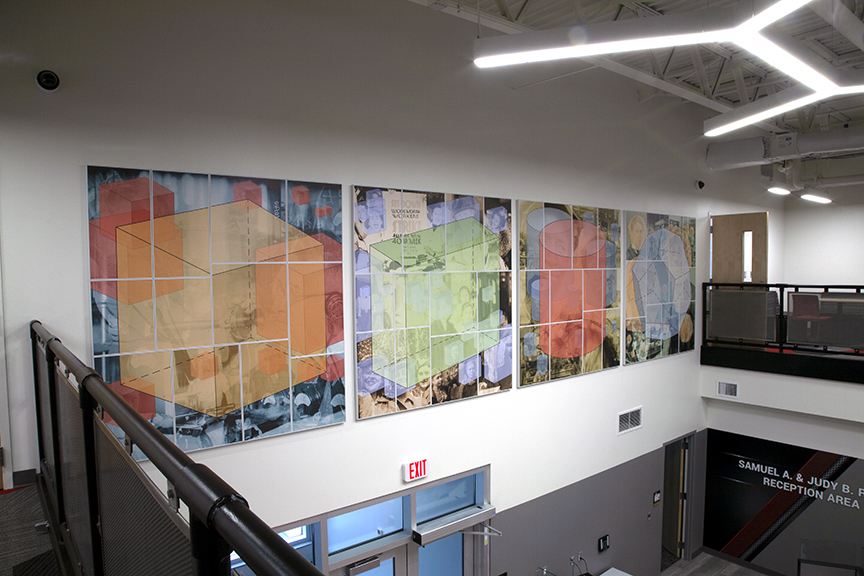 Less formally elaborate in execution, it too is a tribute to manufacturing and the labor that goes into it. Consisting of four large panels, the piece plays with layers of shapes and Kennedy’s trademark random elements. Colorful basic 3D printing shapes dominate the pieces in translucent colors, while the background consists of rectangular blocks filled with historic images of workers pulled from a collection of photographs in the United States Library of Congress. Like “Brick by Brick (Progress),” this piece also plays with historical concepts and modern developments creating a visual conversation between manufacturing past, present and future and demonstrating the connections that have built our world.

Jaime Kennedy is an associate professor in the School of Visual Communication Design where he teaches photography. His works have been shown at the SRO Photo Gallery at Texas Tech University, Space Gallery in Cleveland, Ohio, Visual Arts Center of New Jersey and other locations. He has won numerous awards and grants including an Individual Excellence Award in Photography from the Ohio Arts Council.