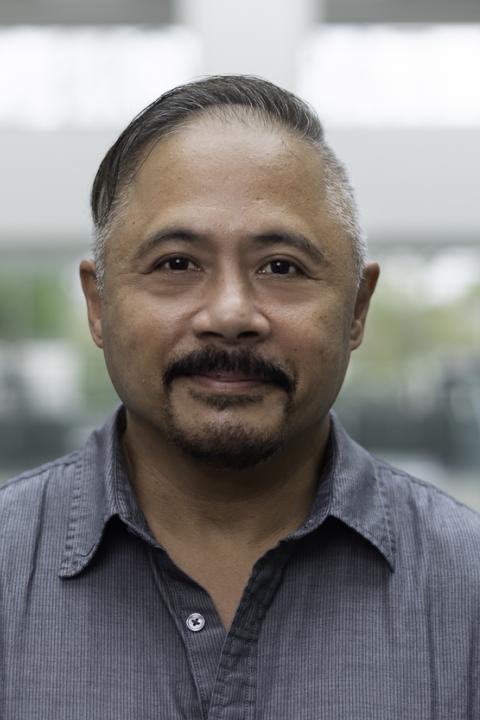 Vince Quevedo is a national and international award winning designer/artist in the areas of fashion design, wearable arts and creative teaching methods. Professor Quevedo received his Bachelor of Science degree in Clothing and Textiles and his Master's of Science degree in Workforce Education and Development with a focus on college teaching at Southern Illinois University. He received his Master of Fine Arts in textiles/fiber from University of Nebraska.
For many years he was selected as one of four Americans to represent the United States at the Busan International Fiber-Fashion and Art biennial in South Korea. He has been a finalist/winner in the American Quilter's Association's design competition for the past 20 years and has been selected to design for the prestigious Bernina Fashion Show which travels throughout the United States and at times in Asia and Europe. One of his other few accomplishments was his invitation at the International Quilt Festival as one of the top wearable arts fashion-designer in the country. The selection process was in-itself one of the most difficult practices in the design field and takes up to two years to be chosen for a particular year. Vince Quevedo has been nominated and invited to this highly prestigious event a total of six times which is an impressive fete. Competition comes natural to Vince Quevedo because he trained as an elite gymnast by his 1964 Olympic coach mother, he competed in ten gymnastics and tumbling nationals to include the NCAA and winning the top award at the USTA Nationals in 1983.

He has taught at the university level for 30 years and has had many years of industry experience to include owning his own men's and women's contemporary design company in San Francisco, California and was selected as one of the top fashion designers of Northern California in 1990. Prior to having his own “Vinci” label, he was the assistant designer at David Ravel Inc. a bridge market where he was responsible for designing collections as well as production preparations. After a short stint in California he returned to Illinois where he taught at Southern Illinois University and also started a business with the label “Tod-Hil Designs” creating and manufacturing active wear that included college track and field uniforms.

Professor Quevedo's research includes the integration of fiber into the arts to express an aesthetic viewpoint by means of incorporating quilting and/or digital technology in clothing and artwork. He teaches technical courses such as flat pattern, draping, apparel production, color theory, fabric manipulation, fiber arts and graduate level apparel design with a focus on contemporary, avant-garde, functional and non-functional clothing, wearable fiber arts and quilted garments. Professor Quevedo is a recipient of numerous national and international awards. One of his most significant achievements is his five Best-in-show/Lectra awards from the International Textiles and Apparel Association's design competition where he competed among other fashion design faculty from around the world. International Textile and Apparel Association is the premier organization in our field. Vince Quevedo considers his greatest accomplishments from his students who have garnered regional, national and international awards for their creations under his guidance.

Teaching has always been a passion for Professor Quevedo. Graduate level design courses that include conceptual design and the production of contemporary art in fiber have been a successful endeavor he is involved with. Understanding the importance of conceptual ideas and supporting it with a body of work to substantiate that idea is important to the emerging design scholars. The researcher as practitioner reinforce Vince Quevedo's teaching philosophy that positive role models can mentor students to investigate, experiment, report and synthesize ideas to make their own.

In 2014, Professor Quevedo received his fourth patent. The patent is a storage device with separate entry/exit features that encloses products that can be easily released and retract from the collar region of a jacket. This patent is a collaborative team project to include Robert Romero from NASA and Klarita Kosova from Cleveland State University.

In 2009, he received his fifth “Best of Show” Lectra Outstanding Faculty Design Award. Top faculty award for the annual International Textile and Apparel Association's Juried Design Exhibition. Supported by the Lectra Design Software Company, this award provides for an all-expense paid trip to Paris, France and admission to Premier Vision, the largest annual event of couture fashion shows and textile exhibits. Professor Quevedo holds the most record for receiving this award.

2006.Bernina Fashion Show Honors introduced the top forty designers selected by peers and industry professionals based on portfolio and awards. This honor and recognition has been awarded to Vince Quevedo a record of six times.