JMC recognized its distinguished alumni and friend of the School at its annual Alumni Awards and Friends ceremony and reception in Franklin Hall on Friday, October 2.

Kent State President Beverly Warren was in attendance to deliver congratulatory remarks in recognition of the accomplishments of this year’s award recipients. JMC Director Thor Wasbotten and JMC faculty members introduced the William D. Taylor, Fast Track and Sharon Marquis Friend of JMC award winners and spoke about the commitment each has shown to the School as students, graduates, and friends and how each has redefined success by stretching the boundaries of a typical career path.

Christine Plonsky was awarded the William D. Taylor Award, the highest distinction given by JMC and presented annually to an alumna or alumnus who is nationally and/or internationally recognized for preeminent contributions to their profession.

Christine is Director of Women’s Athletics at the University of Texas, a position she has held since 2001. She has been a leading figure in athletics for nearly four decades and demonstrates the versatility of a journalism degree. Christine is a former editor of the Daily Kent Stater, and graduated in 1979 as the “outstanding student in journalism” (magna cum laude). She lettered in basketball three years at Kent State. She has received numerous awards throughout her career and is considered a leader among her peers, not simply for the barriers she has broken in a male-dominated profession, but because of the leadership role she has taken on issues and opportunities impacting intercollegiate athletics.

Danielle Wiggins was selected as one of the Fast Track Award recipients, presented annually to recent alumni for early and significant contributions to their fields.

Danielle delivered an emotional tribute to her grandmother in her acceptance remarks. “I found who I was here,” Danielle said. “I am so grateful that you made the impossible possible for my 93-year-old grandmother, that she sees herself in me every morning she turns on the TV.”

Danielle has served as the traffic reporter for WKYC-TV, the local NBC affiliate in Cleveland, since 2013. Previously, she held a variety of production and producing roles at Cleveland's CBS and ABC local affiliates. She received her start in the business as a paid intern for NPR's "All Things Considered" afternoon newsmagazine. Danielle is a two-time graduate of our program, earning a bachelor’s degree in broadcast journalism and a master’s degree in media management.

David Lawson was also named a Fast Track Award recipient, but was unable to attend the awards ceremony. David’s parents were present to accept the award on his behalf.

In his video acceptance, David credited Kent State and JMC for serving as the cornerstone for his professional career. “I had the confidence, the skills and the education necessary to tackle the real world and I’ve progressed professionally because of it,” David said.

David is an Insights Strategist at Miner & Co. Studio in New York City where he specializes in qualitative research. An avid follower of all aspects of pop culture and technology, David had his eyes set on New York City upon graduation and started his career with Hill Holiday. Immediately prior to joining Miner & Co. Studio, David was at Tonic Insight conducting custom research projects and managing online communities across a range of clients and consumer categories. Not only has David had a stellar and laudable early career in advertising research, he also has been an active resource for other JMC graduates who move to New York City.

Gary Harwood was awarded the Sharon Marquis Friend of JMC, presented to an individual who has demonstrated remarkable support to JMC’s mission and its students. This is Gary’s second time receiving this award.

Gary described his passion for elevating the experiences and opportunities for students. “It’s about giving back,” Gary said. “I’ve been thrilled to watch the Photojournalism program take off. And, it’s special to be a part of it.”

Gary is a lecturer at JMC and his work as a photographer for the past 27 years has earned numerous national, regional and local awards. His focus on storytelling fits so well with our mission as educators and his role as an instructor and mentor has made an extraordinary impact on JMC’s Photojournalism program.

Watch clips from the 2015 Alumni Awards and Friends ceremony

View the photo gallery from the event 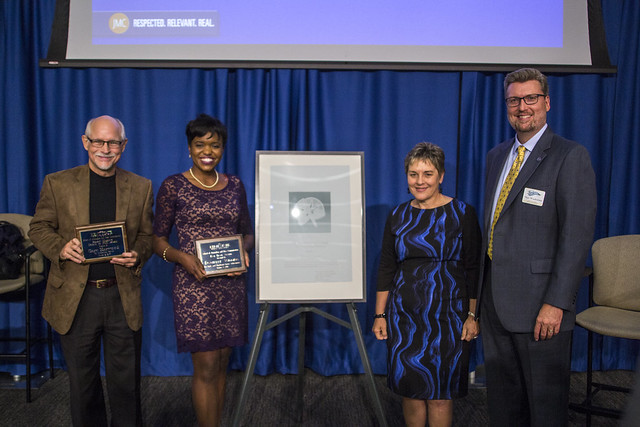