A group of Brazilian are visiting KSU this month to work on multimedia storytelling projects focused on American media and culture. 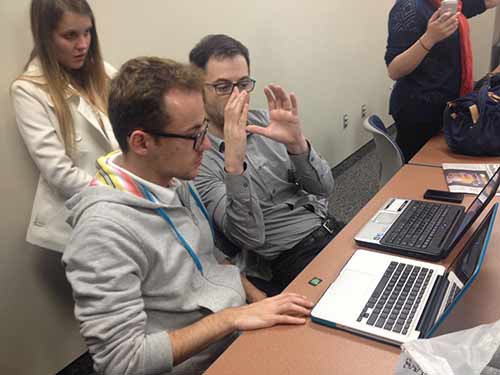 A group of Brazilian students from Pontifical Catholic University of Parana (PUCPR) are visiting Kent State University this month to work on multimedia storytelling projects focused on American media and culture.

“This is an academic program,” McKenney said. “They’re doing our project - DatelineBrazil - in reverse.”

Ten Kent State students are hosting the visitors, six of whom participated in the DatelineBrazil storytelling course. The host students were charged with setting up interviews and providing transportation for the Brazilian students.

The students flew into Ohio on Sunday, September 15. By coincidence JMC’s newest faculty member,Federico Subervi, Ph.D., shared a flight with the Brazilian students when they depart from a connecting flight in Texas.

“We didn’t plan it at all. It just sort of happened. Even before they got to Kent State, they had a guide,”
McKenney said. 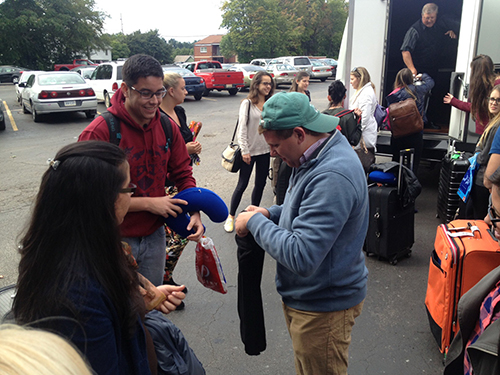 When the students arrive, they checked into University Inn and attended a dinner at the home of CCI’s DeanStanley Wearden and his wife Deborah Davis, director of academic relations for the Office of Global Education.

Throughout their stay in Kent, the Brazilian students will visit a pumpkin farm, observe Channel 3 News in action, tour the Rock and Roll Hall of Fame and watch a Cleveland Indians baseball game. McKenney hopes this will give the group a taste of life in Northeast Ohio.

“When most people from other countries think of America, they think big cities and national landmarks,” McKenney said. “We want to show them the things in Kent that are a bit different in flavor.”

After their week in Ohio, the students will travel to New York City to complete their multimedia projects. While there, the group plans to visit NBC studios, the Statue of Liberty, Central Park and a Broadway show, McKenney said.

“At the end of the day, they’re journalists excited about reporting in a different country,” McKenney said. “We’re trying to help them get everything they need.”