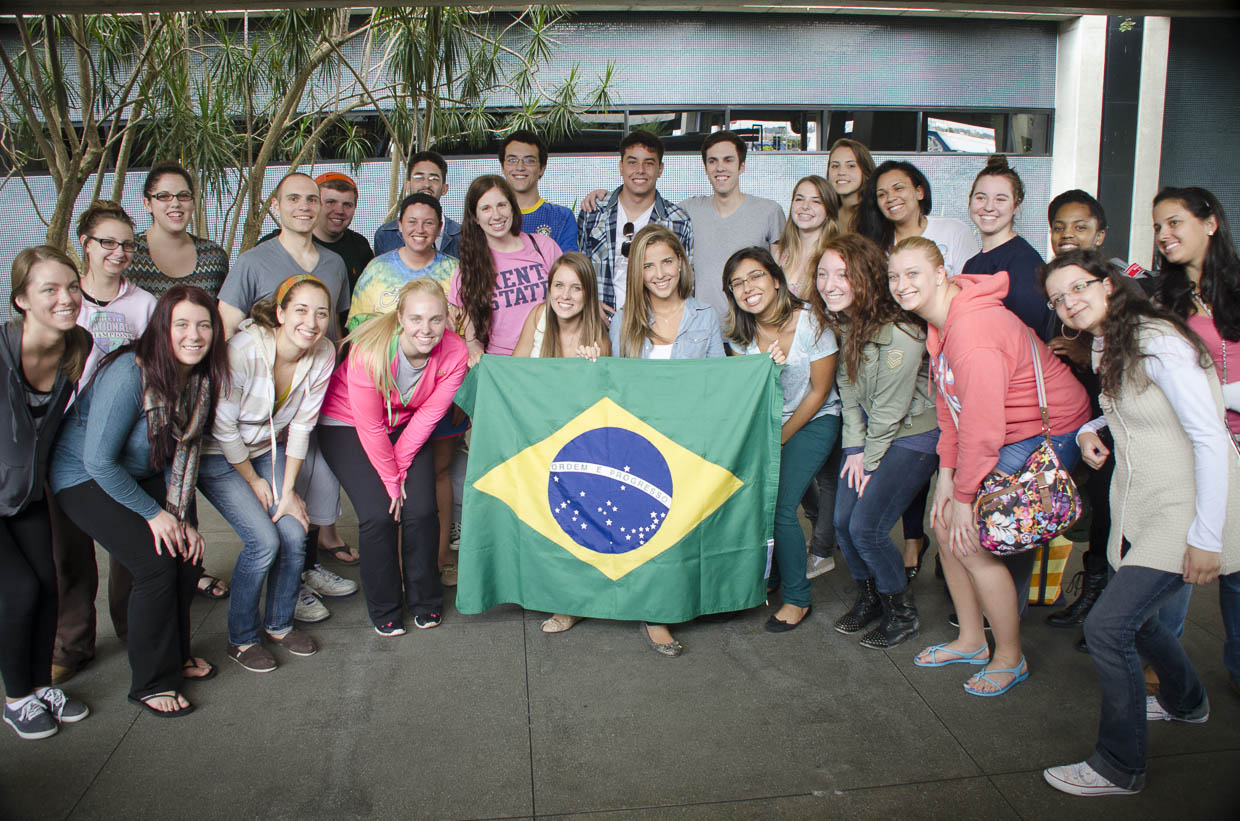 Sixteen students and three faculty members traveled south of the equator for two weeks in March to tell the story of the people, places and things in Curitiba, Brazil. The students were members of the College of Communication and Information's International Storytelling course.

"I've never stepped foot outside of the United States until this class, and I'm thrilled," said Molly Devaney, senior broadcast journalism major. "We had an unbelievable journalistic experience. We partnered with an intelligent bunch of Brazilian students who wanted to learn just as much about us as we wanted to learn about them."

The students spent all day covering unique aspects of Curitiba and Brazil in general. Students covered stories, such as the booming Catholic population in Brazil, hazing, the public transportation system of Curitiba, Curitiba favelas and more. Two Kent students went to Iguaçu Falls to report on the world's largest hydroelectric power plant. When the students weren't reporting, they spent most oftheir time bonding with their Brazilian partners or exploring the city of Curitiba. Some of the highlights included an outdoor Curitibian market, a bus tour of the city, Oscar Niemeyer Museum and botanical gardens.

Most of the trip was devoted to reporting, but there was free time for the students. The last portion of the trip was spent in Rio deJaneiro, where the students had nothing to do but explore. While in Rio, the students saw the Christ the Redeemer, took the cable car to Sugar Loaf mountain and caught some rays on Copacabana beach while soaking in the Brazilian culture.

"The class was everything I had imagined," said Glenn Bolich, senior broadcast journalism major. "The students we met in Brazil were helpful and fun to be around. It was such a fun time, and I would recommend it to anyone."

The International Storytelling course meets all semester. Before the trip, students create a story with a connection to the country they are going to, as well as plan out the stories they want to do while there. One of the most fun parts of the class is "meeting" the partners via Skype. The week before and week of spring break are spent in the foreign country. Once the students return to Kent, they work on producing all pieces of their stories and launch the Dateline website.

"The resources and opportunities made available to us through the Brazilian university and student partners were amazing," said Alyssa DeGeorge, senior magazine journalism and visual communication design major. "It's crazy to think how significant a two-week time period can be. We developed our journalism skills, expanded our horizons and formed close friendships. You don't come back from a trip like this the same person."