Professor David LaBelle and a group of five photojournalism students traveled to Kingsport, Tenn., on Nov. 22 to capture images and record footage of the Santa Train, the world’s largest Santa parade.

The Santa Train runs a 110-mile route from Pikeville, Ky., to Kingsport, Tenn., each year on the Saturday before Thanksgiving in celebration of the holiday season. The Santa Train makes 14 stops in Kentucky, Virginia and Tennessee, distributing more than 15 tons and $300,000 worth of clothing, food, candy, toys and gifts to thousands of people.

LaBelle and his wife, Erin, have photographed the Santa Train for several years. LaBelle said this is only the second year he has taken students to capture the event, which is one of Appalachia’s most anticipated holiday traditions.

“The mission is to get students off campus and in environments they are neither familiar nor comfortable with,” LaBelle said. “It is critical we encourage our students to see and work in unfamiliar environments.”

LaBelle said the students woke up at 5 a.m., drove nearly 100 miles following the train until it stopped in Kingsport, Tenn., at 3 p.m., then drove back to Kent.

“That is dedication, said LaBelle. “I am so proud of them.”

The students interacted with people who have attended the Santa Train their whole lives and were surprised about their openness to speak with them and be photographed.

Senior visual journalism major Brianna Neal said she used multimedia elements to capture footage and was able to record interviews with people who have attended the Santa Train.

“I experienced what it was like to be a backpack journalist,” said Neal. “Carrying around loads of equipment, driving through the mountains to the next destination with a minimal sense of where I was and only having one opportunity to capture all the footage and audio I needed proved to be difficult.”

“The people in those towns were incredibly polite, and I met some people that I will never forget,” Neal added.

Sophomore visual journalism major Andrea Noall said the opportunity was eye-opening because the Santa Train traveled through rural areas in which most of the people are impoverished.

“I met so many incredible people with incredible stories,” said Noall. “Many of the people I talked to had come every year since the Santa Train first began. I experienced an incredible journey as we traveled through Appalachia. It was beautiful, and I found myself falling in love with the land, and more importantly, the people,” Noall said.

“Throughout the trip, I learned a great deal about photography, what I should be thankful for, and how I should begin to help others more. I have taken away so much from photographing the train that ceaselessly never stops giving,” Noall added.

Sophomore visual journalism major Amani Williams said the trip gave him the opportunity to see what people in the small towns were like and how much the tradition means to them.

“I was able to capture the excitement on the faces of kids when they caught a bear or scarf and see just how much it meant to them,” said Williams. “It was a great opportunity for me to practice what I hope to be doing in the future.”

The Santa Train made its inaugural run in 1943 and is sponsored by CSX Corporation, Food City, the Kingsport Area Chamber of Commerce and Dignity U Wear. This year marks the train’s 72nd trip through the region.

For more images from the trip, visit the photogallery. 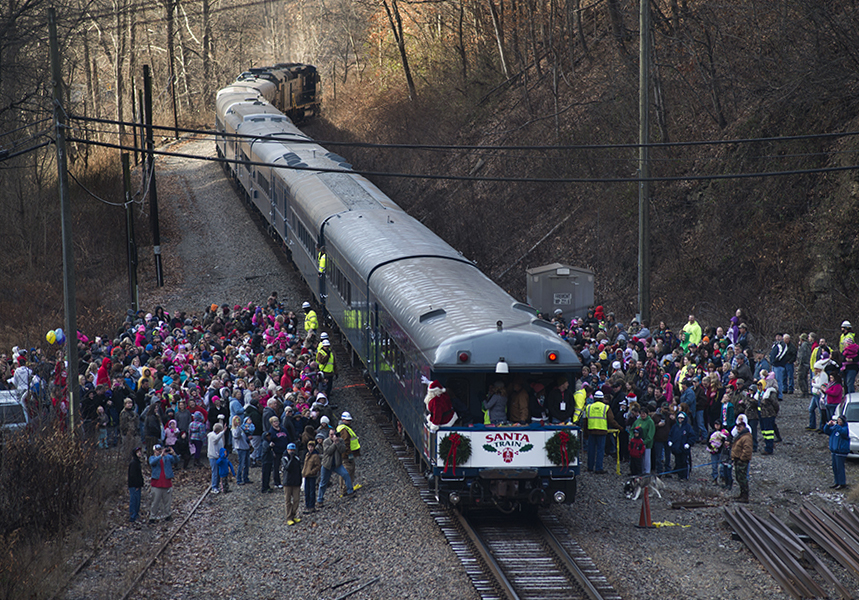 The Pulitzer Prize of Collegiate Journalism
Kent State finished among the top 20 programs in the nation and first in the state of Ohio in the Hearst Journalism Awards Program for 2016-2017....
School of Media and Journalism
College of Communication & Information
Street Address
550 Hilltop Dr., Kent State University, Kent, OH 44242