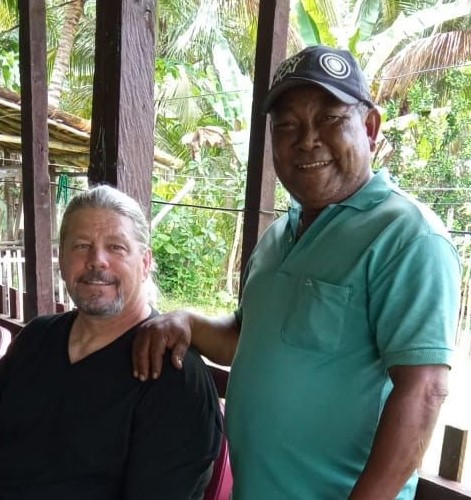 Jeffrey Hallam, Ph.D., FRSPH, professor of social and behavioral sciences and associate dean for research and global affairs of the Kent State University's College of Public Health, recently returned from a five-week visit to Brazil. Hallam joined the faculty of the Graduate Program in Health Sciences (PPGCS) of the Pontifical Catholic University of Paraná (PUCPR) as a visiting scholar and had a unique opportunity to work in the field fighting against leprosy.

In the first part of his trip, Hallam joined a 12-day research expedition to the village of Santo Antonio do Prata, a former leprosy colony located on the outskirts of the Amazon rainforest in Pará, in the north of Brazil. The expedition's goals included case identification and recruitment of patients and controls into a research study on leprosy immunodiagnostics. Headed by Annemieke Geluk, Ph.D., a partner researcher at the Leiden University Medical Center (Netherlands), the project was financed by the Leprosy Research Initiative and led, in Brazil, by PPGCS Marcelo Távora Mira, Ph.D.

"The goal was to identify active and passive cases of leprosy and test a new technology," says Hallam. "For the first time, we used a novel field test to see how it would work compared to the standard laboratory testing for early diagnosis." If found valid and reliable, the new leprosy field test will allow practitioners to screen patients for leprosy so that treatments can start sooner. "With this new test, you do not have to draw venous blood, maintain it at the proper temperature and bring it to the lab for analysis because the blood used in the new field test comes from a fingerstick," explains Hallam. "This was the first time this technology has been tested."

To identify new active and passive cases of leprosy, Hallam also participated in home visits in the Prata village. "Instead of having people coming to the clinic, we visited residents who may have been in contact with infected or exposed individuals. Dermatology medical residents conducted physical examinations of the family members and those who lived in that residence," Hallam adds. "The M. leprae causes leprosy. It does not kill the host but stays with it for a long time: it can take 10-15 years for a person to become symptomatic. Moreover, if someone has been exposed to leprosy, it does not mean that they are infected."

Testing this new technology was only the first step of a longer investigation in the Prata. "The next step is to look at the community members' overall health," explains Hallam. "While people did participate in the study, there is still a lot of miscommunication and stigma associated with leprosy. My goal is to identify the barriers to treatment, reduce stigma, and improve communication with people that live in the Prata."

Hallam traveled to Curitiba, Brazil, where PUCPR is located in the second part of the trip. He toured public and private hospitals and clinics, learned about the built environment and city design, gave a conference about his research to PPGCS's faculty and students entitled "Construct Validity of Health Behavior Interventions and Research in the Kent State University College of Public Health," and gave an intensive course on "Construct Validity of Health Behavior Interventions" to an audience of 32 master's and doctoral students. "Students and faculty were very excited about this course," states Hallam. "While they conduct many clinical trials and bench research in PPGCS, the social and behavioral science perspective offered an alternative view on how to improve overall health."

Hallam's trip to Brazil was also an excellent opportunity to strengthen the relationship between the College of Public Health and the Graduate Program in Health Sciences of the Pontifical Catholic University of Paraná. "This successful partnership started when Dr. Mira came to Kent State as visiting professor," states Hallam. "When in Paraná, I met with the university's faculty and researchers to better understand what they're doing and shared what we're doing to strengthen our collaboration. We're exploring the possibility of having faculty and student exchanges," concludes Hallam.