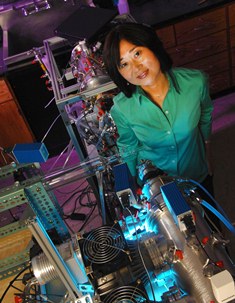 Lee’s research is a component of the broad community experiment, SOAS, designed to further investigate the oxidation of the emissions (biogenic volatile organic compounds, or BVOCs) of plants in the context of the atmospheric environment of the Southeast United States. That project is part of a bigger collaboration, the Southeast Atmosphere Study (SAS). Their field campaign is taking place this summer in Brent, Ala. There are two research aircrafts taking measurements along with ground-based measurements. Lee’s group is one of about 30 research groups that is doing ground-based measurements.

SOAS is one of the largest atmospheric field studies taking place in the United States. The campaign is co-sponsored by the NSF, Environmental Protection Agency (EPA) and National Oceanic and Atmospheric Administration (NOAA).

“The purpose of this campaign is to understand the chemical and physical mechanisms related to air pollution and climate change,” Lee said. “The Southern United States has abundant biogenic volatile organic compounds (BVOCs) emitted from trees and various anthropogenic air pollutants from industries. Under strong sun conditions, these BVOCs and sulfur and nitrogen oxidants emitted from power plants and automobiles together produce high concentrations of ozone and particular matters, both of which affect human health and air quality.”

The project will investigate the effects of organic amines on secondary organic aerosol (SOA) formation processes. Amines, along with ammonia, are the dominant organic base compounds in the atmosphere. They are invariably present in aerosol particles, and may contribute to SOA formation through condensation of their oxidation products, or by the formation of salts with more acidic aerosol particles.

“Amines and their oxidation products may have adverse health effects and directly impact air quality, and visibility,” Lee said. “At present, measurements of gas-phase amines, especially in biogenic environments in the southeastern United States, are lacking.”

Lee’s research group recently developed a unique chemical ionization mass spectrometry technique to detect very low concentrations of atmospheric trace amines with fast time response. “We are one of only three research groups in the world that have such capabilities,” Lee said.

For more information about the Southeast Atmosphere Study, visit http://www.eol.ucar.edu/projects/sas/.