​Since the inauguration of Blossom Music Center as the summer home of The Cleveland Orchestra in 1968, Kent State University has participated in helping to develop Blossom's role as a center for professional training in the visual and performing arts. 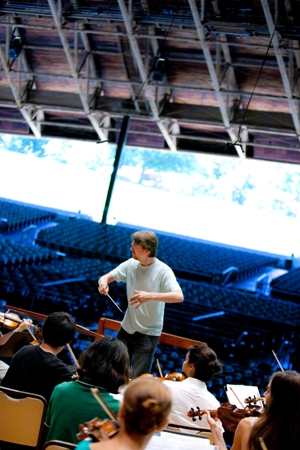 Celebrating their 55th season, the advanced training programs in art and music were established in 1968 and a similar theatre program was implemented the following year. The three Kent Blossom programs divide their time between the university's home campus in Kent, Ohio, and special performance facilities as Blossom Music Center, as well as occasional performances at other select locations in northeastern Ohio. In 1971, Porthouse Theatre was opened on university property adjacent to the original Blossom grounds and, in 1975, Eells Art Gallery was constructed by the university inside Blossom's main gate.

The Kent Blossom arts programs are organized within the university's College of the Arts. Each summer, Kent Blossom brings together 200 young professionals in art, music and theatre, as well as 70 resident faculty members, including Kent State faculty, members of The Cleveland Orchestra, and major international artists. Through the production of more than 100 exhibitions, concerts, performances and lectures, the students' creative experiences are shared with an audience of nearly 20,000 a year.

In 2023, the 55th season of Kent Blossom Music Festival will bring 43 young artists from around the globe together with principal members of The Cleveland Orchestra and other major artists for five weeks of intensive chamber music study and performance at the professional level.

Since its founding in 1968 by George Szell and Louis Lane, more than 2,500 such young artists and world-class professionals have shared the nationally recognized Kent Blossom experience. Blossom enjoys a significant position of enriching the international music field. The program has propelled hundreds of remarkable young musicians into the ranks of major orchestras, opera companies and conservatory facilities throughout the United State and around the globe.