The Kent State University High-Power Rocket Club began in 2016 and is open to all students. The club is an Integrated Product Team comprised of members with varying majors, assembled with the intent to design and build high-power rockets for professional competition. The purpose of this student organization is to advance the arts, sciences, and technology of aeronautics and astronautics, to develop professionalism and leadership of those engaged in these pursuits, and to promote community outreach of the sciences.

Check out a Rocket Launch from camera mounted on the rocket. Audio contains beeping signaling the device is performing functions. Content stops at 3:00. 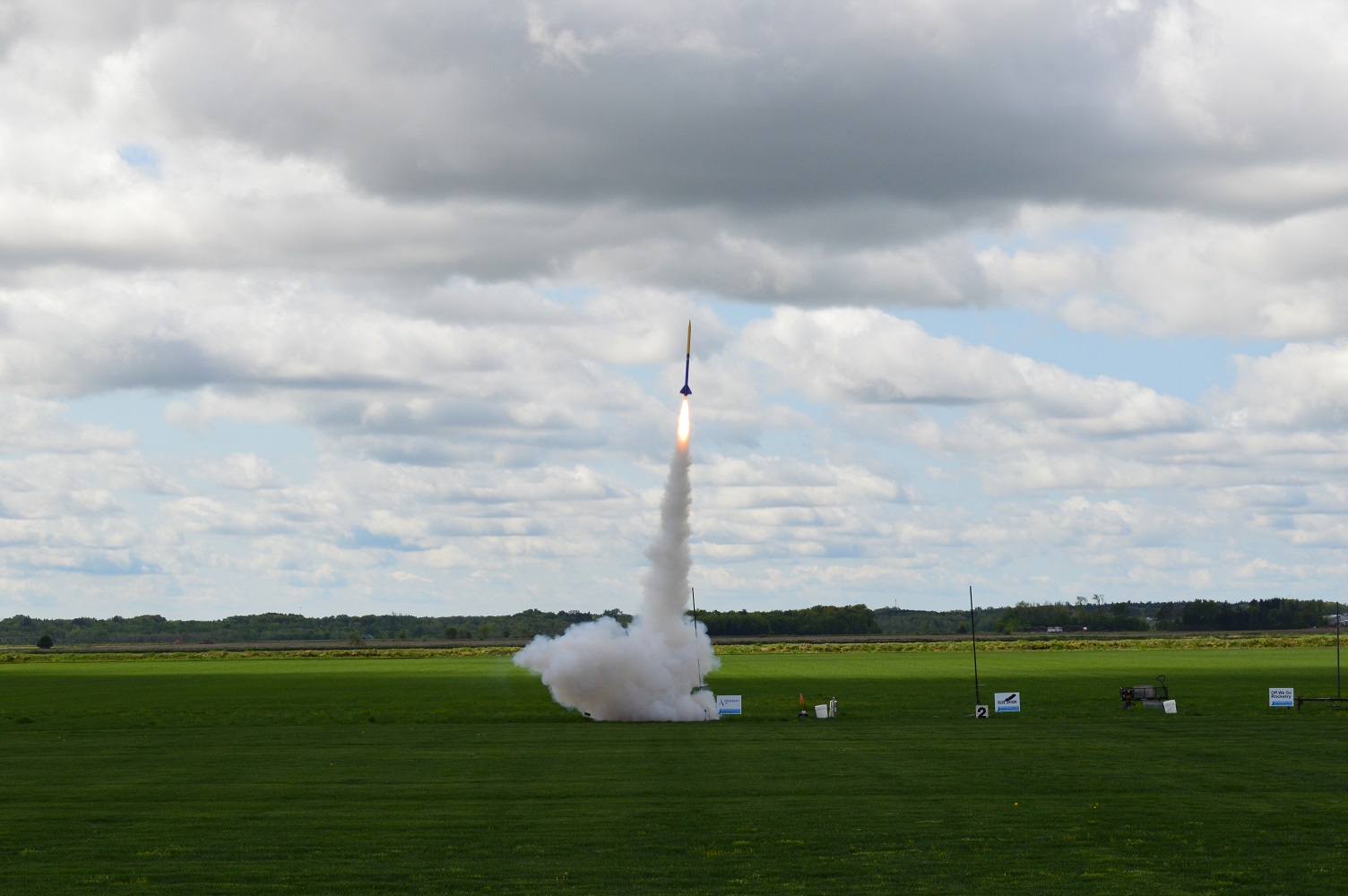 The College of Aeronautics and Engineering’s 14-member High-Power Rocket Team took fourth place out of 14 participating universities in the 2018 Midwest High-Power Rocket Competition, in May outside Minneapolis, Minn. Led by project manager, Nelson Figueroa, and safety officer, Adam Fertig, the team designed, built, tested and flew a rocket meeting the competition requirements which focused on controlling the roll of the rocket during the ascent phase. Kent State took first place honors in two of the five graded categories including the launch and the team technical presentation. Kent State’s rocket, named Mark Rollberg, was also voted coolest-looking rocket. The team set a record of the most launches of the same rocket during the competition. Funding from the Ohio Space Grant Consortium and the College of Aeronautics and Engineering made Kent State’s participation possible.

2017-2018 Competition Goals: Student teams will design and construct an active roll/orientation single stage high-power rocket system (dual deploy optional) that will fly twice on the same I-class or J-class motor and be recovered safely and in flyable condition. The students must implement a roll-control mechanism (without using forward canards) that can minimize roll (on the first flight) then follow a set of commands to roll to a series of specific orientation angles, then hold each orientation for about 1 second (on the second flight). Students must construct a non-commercial on-board data-logging sensor package that can log roll orientation (at least) at 10+ Hz, for comparison with orientation as documented by a downward looking video camera. Bonus challenge: Implement an XBee radio-based communication system so that the orientations requested can be reprogrammed at a distance and so that orientation data (and possibly other sensor data) can be sent down to a ground station by radio while the rocket is still in flight. More points for teams able to control roll and hold orientation effectively. More (bonus) points for teams able to send commands and data through their communications system quickly and reliably.

2016-2017 Competition goals: Student teams will design and construct an “adaptable” single stage, dual deploy high-power rocket system that will fly to the same highest possible altitude on two motors (one I-class and one J-class, or else one J-class and one K-class) that are as different as possible from one another. The rocket must be recovered safely and in flyable condition. The students must predict the rocket’s flight performance (with each selected motor) and construct a non-commercial on-board data collection package for the rocket that will directly measure velocity versus time, for comparison with data collected by a commercial rocketry altimeter, as well as sense and log airframe separation and parachute extraction from the airframe for both drogue and main parachute deployments, and also collect up and down video from outside the airframe to certify expected (i.e. primary, not backup) drogue and main parachute full deployment. 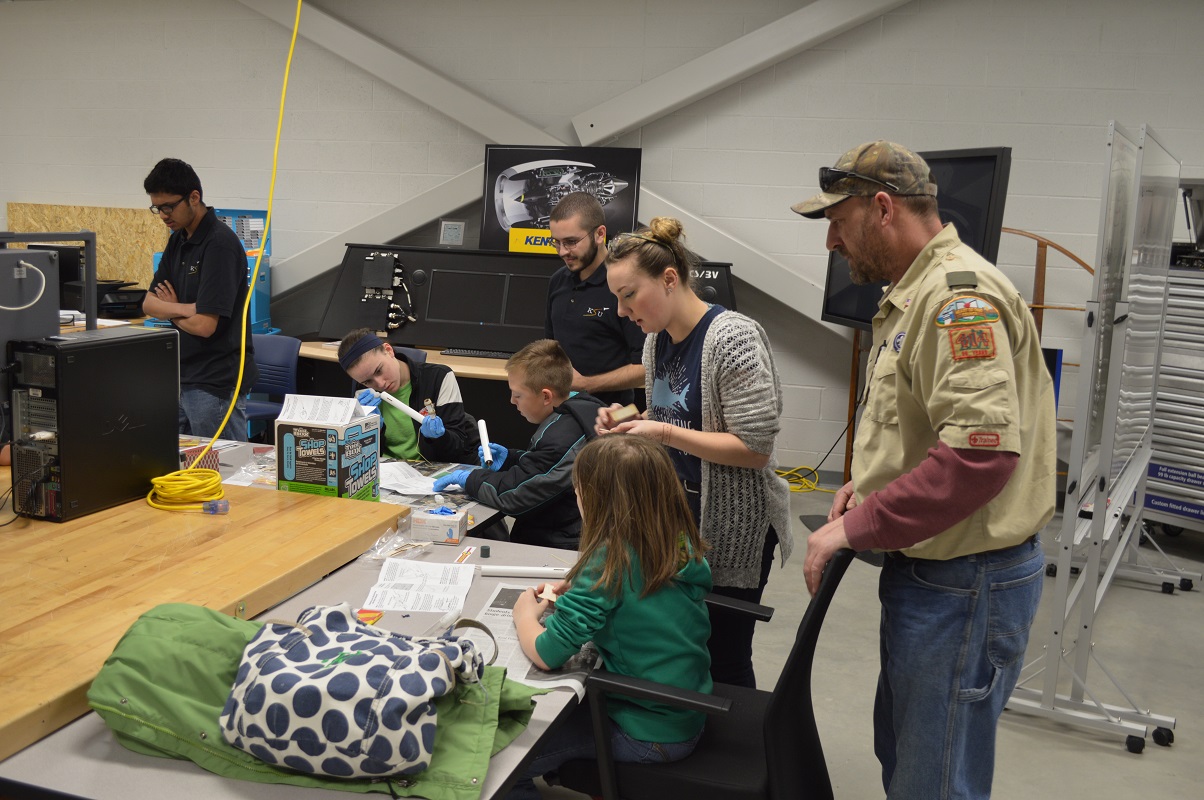 The Kent State HPRC's objective for this year’s outreach program is to team up with Boy Scouts of America (BSA) troops in the Northeast Ohio area and, simultaneously, satisfy our outreach requirement and provide an opportunity for the Scouts to earn their Space Exploration Badge. The Kent State HPRC will present our competition rocket to the BSA and then assist the Scouts in building, launching and recovering model rockets.

The Kent State High-Power Rocket Club will proudly be supporting the June 12-16, 2017, Engineering Camp for Middle School Girls and ACE camp. During these events, we will be conducting an educational outreach where the Kent State HPRC will present ideas regarding the fundamentals of high-power rocket design, development and engineering, as well as the role rocket technology plays in today’s advancing technology.