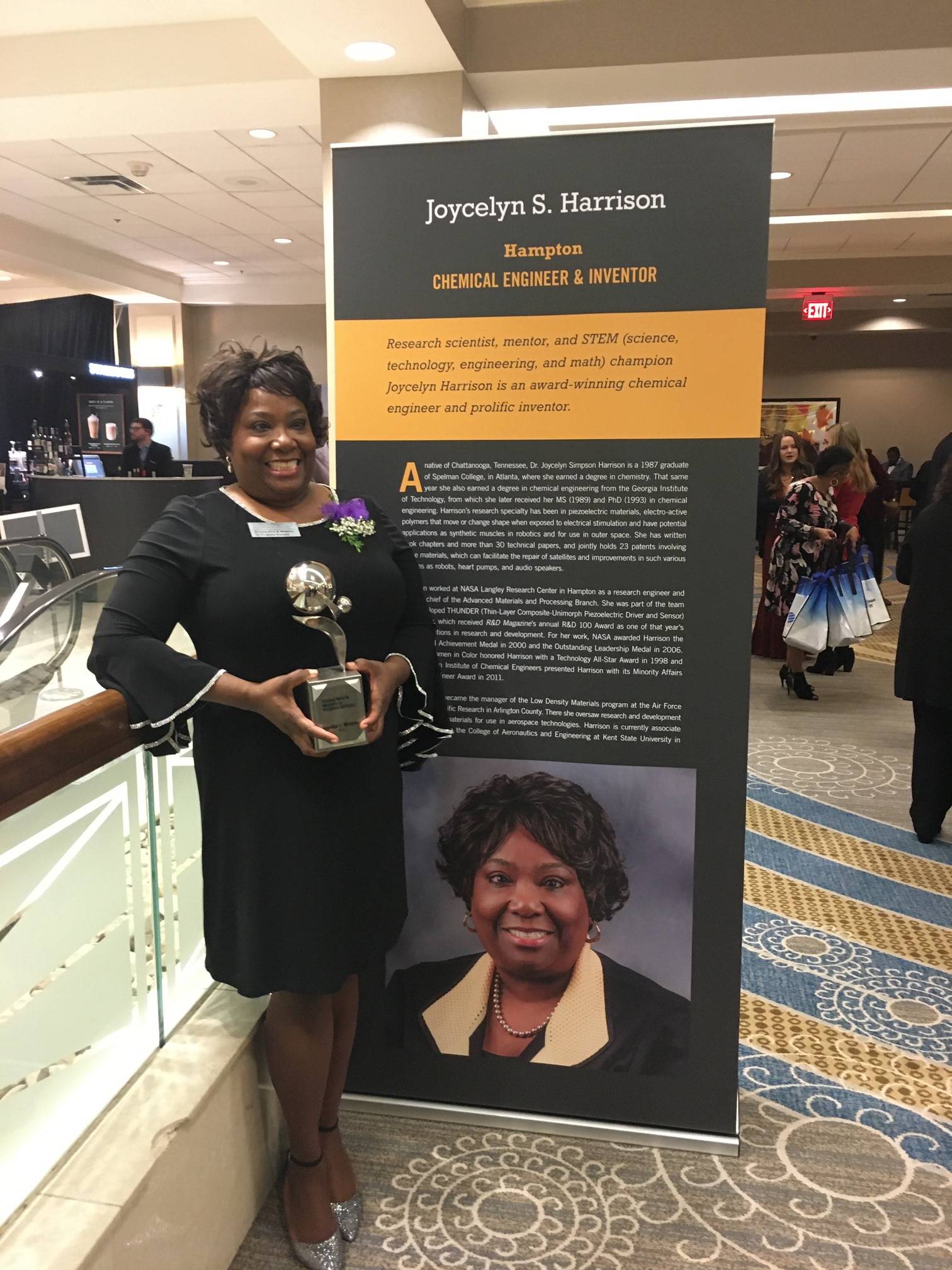 College of Aeronautics and Engineering (CAE) Associate Dean Joycelyn Harrison, Ph.D., was selected as a 2020 Dominion Energy and Library of Virginia “Strong Men and Women” in Virginia History honoree.

Each year, in conjunction with Black History Month, Dominion Energy and the Library of Virginia honor notable African Americans, past and present, through their Strong Men and Women in Virginia History program.

Harrison was presented with her award February 6, at the Downtown Richmond Marriott Hotel, where honorees, elected and appointed officials, business and community leaders, educators, students and past honorees gathered. The Dominion Foundation will make a $5,000 grant in Harrison’s name to the Arlington Branch of the NAACP Scholarship Fund.

“I am truly honored to receive this award and thrilled that it will provide scholarship support for aspiring young scientists and engineers. I have full confidence that the intellectual curiosity and passion for social justice that is reflected in the next generation of “Gen-Z” scientists and engineers will result in amazing discoveries and solutions to the global challenges we face today,” Harrison says.

Educational resources featuring the honorees will be on display and used throughout Virginia during Black History Month. Additionally, a panel exhibition will travel to libraries and museums across the state during the year.

Harrison is a chemical engineer by trade as well as a research scientist, mentor, and STEM champion. She is an award-winning engineer and prolific inventor.

Harrison is a 1987 graduate of Spelman College, in Atlanta, where she earned her degree in chemistry. That same year she also earned a degree in chemical engineering from the Georgia Institute of Technology, from which she later received her M.S. (1989) and Ph.D. (1993) in chemical engineering. Harrison's research specialty has been in piezoelectric materials, electro-active polymers that move or change shape when exposed to electrical stimulation and have potential applications as synthetic muscles in robotics and for use in outer space. She jointly holds 23 patents involving these materials, which can facilitate the repair of satellites and improvements in such various devices as robots, heart pumps, and audio speakers.

Harrison worked at NASA Langley Research Center in Hampton as a research engineer and later as chief of the Advanced Materials and Processing Branch. She was part of the team that developed THUNDER (Thin-Layer Composite-Unimorph Piezoelectric Driver and Sensor) technology, for which they received R&D Magazine's annual R&D 100 Award as one of that year's best innovations in research and development. For her work, NASA awarded Harrison the Exceptional Achievement Medal in 2000 and the Outstanding Leadership Medal in 2006. National Women in Color honored Harrison with a Technology All-Star Award in 1998.

Harrison has authored more than 30 technical papers and currently holds more than 20 patents in the area of electroactive and nanostructured materials. She has authored chapters on piezoelectric polymers for the Encyclopedia of Smart Materials and the Encyclopedia of Polymer Science. Harrison has received numerous awards, including one of NASA’s highest honors, the Outstanding Leadership Medal. Harrison has been recognized as one of the Top Minority Women in Science, Engineering and Technology by the National Technical Association and received the 2011 American Institute of Chemical Engineers Minority Affairs Eminent Engineer Award. In 2012 she was inducted into the HistoryMakers archive of 180 of the nation’s leading African American scientists.

In 2009 she became the manager of the Low Density Materials program at the Air Force Office of Scientific Research in Arlington County. She later was named the Director of the Budget Plans, and Integration Division where she was responsible for implementing the investment strategy for the $500M basic research portfolio of the US Air Force.