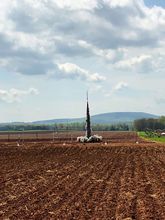 Seven students from the Kent State High-Power Rocket Team traveled to Huntsville, Alabama to participate in their first NASA Student Launch Competition. Students came from around the country with the goal to design, build and fly a rocket and payload that would deploy upon landing. The name of the team’s rocket was “Flash…Ahh Ahh!” In reference to the classic Queen song and the Kent State Golden Flashes.

This was Kent State’s first entry into the year-long NASA high-power rocket competition, which consisted of seven events and report submissions. The team placed 23 out of 45 teams. Funding for this event came from the Ohio Space Grant Consortium.