The research interests of our group focus on the links between vascular health, blood flow regulation and muscle function.  Our studies include a variety of techniques aimed at measuring vessel stiffness, vasodilatory capacity, endothelial function, blood flow and autonomic function in both healthy and diseased populations.

The list of projects below are currently in the state of data collection or manuscript preparation.

Peripheral Vascular Function in Parkinson’s Disease
Although it is well established that individuals with PD have autonomic dysfunction that negatively impacts blood flow and blood pressure regulation, it is currently unknown if they also have peripheral vascular dysfunction.  The goal of this current study is to determine if peripheral vascular dysfunction is present in those with PD and, if so, determine if it can be reversed with antioxidant supplementation. 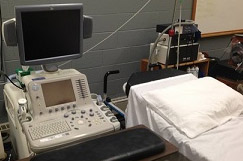 If you want to learn more about the vascular health lab, please contact Dr. McDaniel at jmcdani5@kent.edu or 330-672-0802.