JMC Promising Scholars and the donors who fund their scholarships invested in their “social capital” on Thursday, October 1, 2015 during a donor/recipient reception at Laziza Restaurant in Kent.

Donor Laura Gordon ‘87, who funds a $1,000 annual scholarship for freshman multimedia journalism major McKenna Corson, spoke at the event. Gordon is a public relations executive managing the health practice at Edelman.  At a recent training she attended through Edelman, she learned the term “social capital,” which refers to relational connections we make that contribute to our lives not only professionally, but personally.  “It made me think of this program,” Gordon said, “and the connections we’re making here.”

Now in its second year, Promising Scholars is a unique scholarship program. High achieving students who seek careers in journalism and mass communication are selected to receive scholarships funded by donors who provide not only financial assistance, but also offer career insights and guidance as the students advance through JMC.

Promising Scholar Caroline Meyer, a photojournalism major, appreciates the connection she made with Gordon, who works in Washington, D.C. Meyer is interning in D.C. in the spring as part of Kent State’s Washington Program in National Issues. “Now I know someone there,” said Meyer.

All 16 Promising Scholars, six freshmen and ten sophomores, participated in the reception at Laziza. A number of donors were unable to attend the event in person, but the students have been in communication with them in other ways.

Most of the Promising Scholar donors are JMC alumni, but they don’t have to be. “We’re interested in people who want to inspire students and have the means, through their own career success, to ease the financial burden of going to college,” said JMC Director Thor Wasbotten.  Anyone interested in becoming a Promising Scholar donor can contact Director Wasbotten at thor@kent.edu.

View the photo gallery from the event below. 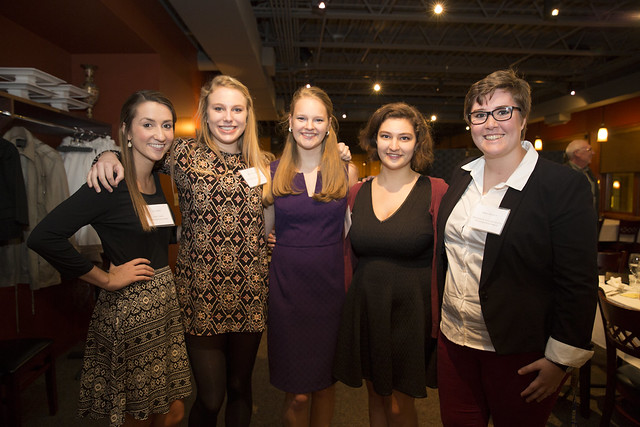