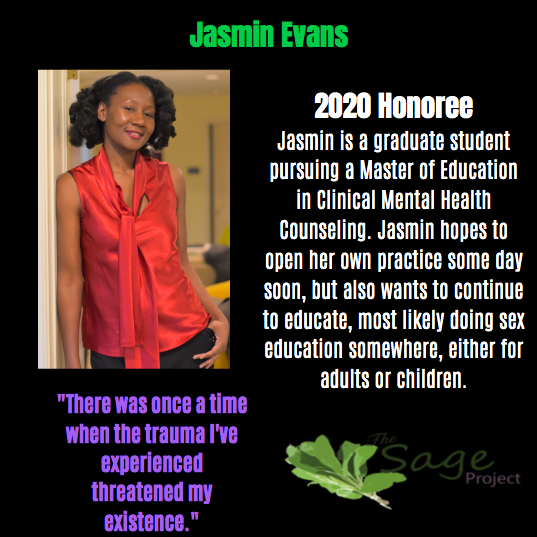 If Jasmin Evans could give advice to any student, she would say to always take chances and push yourself out of your comfort zone.“You never know what will be the thing that really sparks something in you” she said. “Don’t be afraid to take chances and risks and try different things. Experience is a great teacher.”

Jasmin has a long history as a Golden Flash; in fact, she first came to Kent State University as a student in 1997 to pursue her undergraduate degree in Pan-African Studies. It was during her time at Kent State that she felt for the first time that she was able to seek out the help that she needed after suffering through sexual trauma. She did not have the chance to confront her experiences head on and get the help she needed due to barriers in her community. The stigma against therapy for mental health in the black community prevents many people from seeking the help that they need.

“There was a time when the trauma I’ve experienced threatened my existence. I did not feel I could go on living because the painful memories were too much,” Jasmin said. “When I sought therapeutic help from my family, I was told to ‘pray about it.’”

After earning her undergraduate degree, Jasmin moved to Washington, D.C., where she lived for six years before moving back home to bring her son into the world. She returned to DC a year later, and earned a Master of Arts in Teaching from Trinity Washington University. Jasmin says that parenthood inspired her to become a teacher so that she could know how to best support her son’s education. It was also important to her to find a career that mimicked her son’s schedule so that she could spend as much time as possible with him.

“Becoming a mother has been hands down the biggest thing that has shaped me, I look more to the future than I did before he was born,” Jasmin said. “He’s been my greatest teacher, and everything I have done since he’s been born, some part of it has been a way for me to make the world better for him. I’m not just living for myself.”

After living in D.C. for 14 years and working as a teacher in different schools, including spending a year teaching abroad in Guatemala, Jasmin decided to return to the place she grew up and pursue a new career. Her own experience with counseling inspired her to help others the way that mental health professionals supported her and have continued to support her. She is now back at Kent State to earn her third degree, a Master of Education in Clinical Mental Health Counseling.

“Counseling literally saved my life, and so as a way to give back and also to fulfill my need to be of service to people, this is how I’ve chosen to do it.

On campus, Jasmin is involved outside the classroom heavily through research. She serves as a co-facilitator for the research study group which helps students who are interested in research learn more about the research process. She says that research has always been an interest of hers.

“I love learning,” Jasmin said, “and I think I will always probably be a student of something. I like taking deep dives into areas that interest me.”

Jasmin hopes to own her own practice some day soon, but also wants to continue to educate, most likely doing sex education somewhere, either for adults or children.