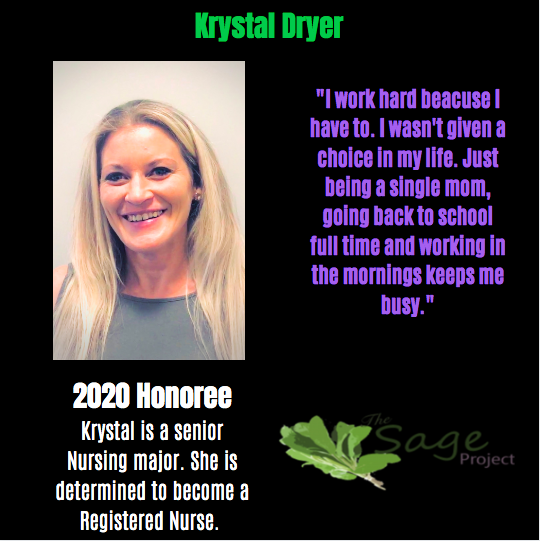 Thirteen years ago, Krystal Dyer was enrolled at a university in Texas with a full ride as a nursing student. Shortly before beginning the program, she received the news that would change the course of her life forever.

Krystal’s husband had tragically passed away in a work accident.

She attempted to continue the program, but due to her mental health from the sudden loss of her spouse, she chose to withdraw and move back to her hometown in Ohio. While grieving, Krystal discovered she was pregnant.

Krystal worked multiple jobs within the medical field, including working as an EMT, firefighter, medical assistant and paramedic, all while struggling to support her daughter.

“I work hard because I have to, I wasn’t given a choice in my life,” says Krystal. “Just being a single mom, going back to school full time and working in the mornings keeps me busy. But my daughter motivates me because I want her to have a good life.”

Fourteen years after having withdrawn from school, Krystal enrolled at Kent State University at Geauga to complete her nursing degree, which happens to be a comfortable 10-minute drive to campus from her home.

Krystal says her favorite thing about the classrooms on Kent State’s Geauga campus are the small class sizes within the nursing program.

“Coming from that Texas university, there were a lot of big classes, I was always terrified to talk to a professor,” Krystal said. “What changed when I moved to Geauga’s campus was that it’s smaller so you can actually talk to a professor and not feel intimidated by them. I guess that kind of changed my outlook on professors I would say.”

Krystal has taken advantage of additional opportunities on campus as well by taking her promotion into her own hands by applying for nursing awards and scholarships. These efforts have been successful for her and upon graduation, she would like to work at a local hospital as a nurse practitioner.

Krystal’s grandfather had a master’s degree in education and worked as a history teacher. But neither of her parents went to college. Her grandfather acts as a major motivation for Krystal - she wants to break that circle and go further with her own education for her daughter’s sake.

“Being a single parent makes me work even harder,” Krystal said. “I mean you have to because that little person depends on you. I want to be her role model, so she can watch me study every night and go to clinicals and rotations, so she can see that this is a normal part of life and will be able to transition into college herself.”

With a pending graduation in 2022, Krystal acts as a leader not only in the classroom but in the community as well. She enjoys time with her horses, which she says are therapeutic for her. She is active in barrel racing and oftentimes will take others with her to the events. Krystal also regularly assists other students with material in the classroom. She participates often and will ask questions to ensure she understands the material.

Krystal feels as though the best piece of advice for students would be to take advantage of any opportunity you can get.

“You’re never promised tomorrow. I mean that sounds generic, but after my husband’s passing, it was totally a wake up call,” Krystal said. “I think education is best. Since I’m older now I can see that.”