An incredible milestone for many was celebrated on the evening of May 11 during the International Graduate Student Reception, which was held in the Kent Student Center Ballroom to accommodate the numerous international graduates who were in attendance as well as their family and friends. The event was co-sponsored by the Office of Global Education and the Kent State Alumni Association and led by emcee Carrie Circosta, Associate Director of International Alumni Relations. Carrie used her time before the audience to encourage them to remain actively connected to Kent State by becoming a member of the KSU alumni association. 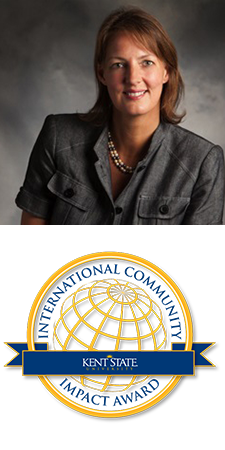 Leading off the evening’s festivities was a keynote presentation by international Kent State alumnus, Bernardine van Kessel, ’93. Originally from the Netherlands, Bernardine is currently the Senior Director of Global Markets for Northeast Ohio. After a short and often humorous reminiscence about her days at Kent State, including as a teammate on the KSU field hockey team, Bernardine enumerated her keys to success, including advising the audience to frequently turn off social media and engage friends and family on a truly personal level. She also advised the graduates to fondly cherish the memories and actively maintain the relationships they made at Kent State throughout their lifetimes, but most importantly to pursue their dreams with an uncompromising passion. Following her talk, she was presented with an honorary commencement sash representing her home country of the Netherlands from Carrie Circosta to the delight of the audience.

The reception also served as the opportunity to present the inaugural edition of the International Community Impact Award. The award was created to recognize graduating international students who had a positive impact on the Kent State community during their time here through community activities and active social relationships.

“Tonight’s winner served as a positive role model and advocate, while working hard to create a welcoming and engaging community,” said International Student Affairs Director, Eron Memaj, who presented the award to Ashish Mondretti amid thunderous applause from his friends and family. 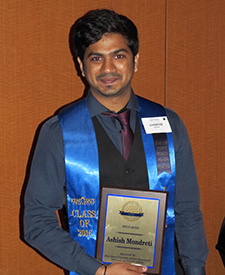 Coming to Kent State from his home in Hyderabad, India, in the spring of 2015, Ashish graduated with a Master’s Degree in Computer Science. During his short time on campus, Ashish consistently made a positive impact on the Kent State community. Besides working as an applications developer in Residence Services on campus, Ashish also presided as president of the Kent Indian Association where he oversaw the planning and staging of several large events including the Dawili and Holi Indian festivals. Through is efforts, Ashish constantly sought to create a home-away-from-home for his fellow international students within the Kent community.

To conclude the formal portion of the evening’s celebration, Kent State Provost, Todd Diacon toasted the international graduates with apple juice and wished them future success, good fortune and happiness. Afterwards, the graduates and their guests sampled a wide assortment of foods, shared an uncounted number of selfies, laughed aloud and said many a tearful goodbye in numerous languages.

Kent State University held its Spring 2016 Commencement ceremonies for the Kent Campus on Friday, May 13, and Saturday, May 14, at the Memorial Athletic and Convocation (MAC) Center, and on Friday, May 20, at Cartwright Hall. Kent State conferred 4,210 degrees, including 3,067 bachelor’s degrees, 968 master’s degrees, 169 doctoral degrees and six educational specialist degrees.

For more photos from the event, visit the KSU Alumni Flickr page.