You might have heard of a group called AfriCOBRA (African Commune of Bad Relevant Artists) and its legacy in African American art history. What you might not know is that one of its earliest members was Kent State alumnus Nelson Stevens, an artist who earned his M.F.A. in Studio Art and Art History from the School of Art in 1969. Born in Brooklyn, New York, Stevens moved to Cleveland where he became a middle school teacher. Years later, when he attended the College Art Association Conference, he met Jeff Donaldson, co-founder of AfriCOBRA. Donaldson told Stevens to move to Chicago, which was the hub of the AfriCOBRA movement. Stevens followed Donaldson’s advice and relocated to Chicago, where he accepted a job at Northern Illinois University. He became one of the first members of the AfriCOBRA group, which went on to hold exhibitions in neighborhoods such as Harlem. 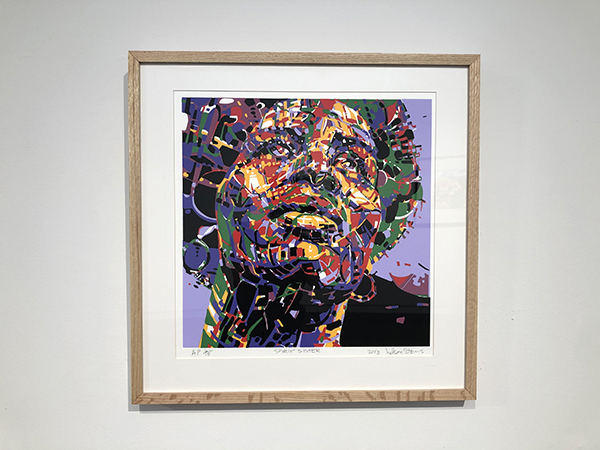 AfriCOBRA emerged in the late 1960s and was founded by Jeff Donaldson, Barbara Jones-Hogu, Wadsworth Jarrell and Gerald Williams. Based in Chicago, the group sought to embody a “black aesthetic” in order to empower the African American community. The movement demonstrates the power of the arts in implementing greater social change.

The pioneering style of the AfriCOBRA movement is prevalent in Stevens’ work. The group preferred “coolade” colors which were bright and bold and often depicted important figures that helped to empower the African American community. Nelson’s work reflects these principles while allowing his artistic expertise to shine. He has painted prevalent figures such as Malcolm X. Stevens even met the human rights activist when he was on tour in 1964. This event inspired his artwork for years to come.

Stevens’ work has been acquired by institutions such as The Brooklyn Museum, which owns his piece entitled Uhuru. Uhuru is a Swahili word which means freedom. (It is also the name of a magazine at Kent State.) Stevens’ Uhuru shows a woman with an afro, which was a controversial hairstyle in the 1960s and 70s. She looks upward, imagining a day when African Americans could experience true freedom.

In addition to his membership in the AfriCOBRA movement, Stevens has been involved with other groups. He started the Art in the Service of the Lord project, which commissioned African American artists to create work for a Black Christian Fine Arts Calendar. He also helped to develop the African American Studies Department at the University of Massachusetts, Amherst into a leading program in the nation today.

“In a society that has for so long depicted African American people according to the cruelest stereotypes and awful caricatures, the black artists of AfriCOBRA set out to create African American art on their own terms and create a movement that spoke to both African-American and black diasporic experiences. A recent show on Jeff Donaldson at the Akron Art Museum also reinforced the sheer talent of AfriCOBRA artists and how they optimized all of the formal elements of line, light, and perspective to create mesmerizing and groundbreaking art,” said Dr. Klein.

The School of Art is working to deconstruct systemic racism in academia and beyond by holding virtual Anti-Racism Town Hall meetings. Additionally, the student-led Anti-Racism and Criticism Collective is a resource that students in any major can join to learn more about how to be actively anti-racist in the community. Students can also take courses in the Art History and Pan-African Studies departments to learn more about issues related to art and race.

The AfriCOBRA movement shows the importance of creating spaces for African American artists to create meaningful art and social change. The School of Art is committed to bringing this spirit to Kent’s campus in order to foster a diverse and inclusive environment for all.