Live Chat
Photo by Dakota Varney: Students arranged for the Kent State Library to be lit up red to raise awareness about lymphoma education and research.

Teams of Kent State Media and Journalism students have been spreading awareness and education about lymphoma this spring as part of a national public relations competition.

The National Bateman Case Study Competition is an opportunity for public relations students to gain experience implementing a full public relations campaign with their PRSSA Chapter. For the 2022 campaign, National PRSSA challenged students to build a campaign surrounding the Lymphoma Research Foundation (LRF), a non-profit that has a dual mission: “to eradicate lymphoma – by funding innovative research – and serve those touched by this disease – by sharing research and treatment insights directly with the lymphoma community through national education programs and resources."

Two teams of students from the PRSSA Kent Chapter (Bateman Blue and Bateman Gold) are participating in the 2022 competition, advised by Professor Stefanie Moore. The Bateman teams implemented their campaigns from Feb. 7-March 11, 2022. After the implementation period, students will spend time analyzing their results and building casebooks. Both teams will submit their final casebooks at the end of March and will receive results later this year.

Journalism major Maddy Haberberger, ‘22, a member of the Bateman Blue team, says her team has been focused on reaching the Kent State community, local medical students and local businesses in downtown Kent.

“We wanted to make sure we didn’t scare people, but that they understood that this disease is serious, and that it’s possible for anyone to be affected by it,” Haberberger said. “We also wanted to get the community involved and inspire people to take care of themselves and understand how simple it is to take that pledge and spread the word.”

Public relations major and Bateman Gold team member Austin Monigold, ‘22, says his team has been focusing on educating Kent State students and the community to develop their B.E.A.T. Lymphoma campaign, an acronym for “Build Community, Educate, Advocate, and Treat Lymphoma.”

“Our campaign is tackling these goals by showing the Kent State community the importance of understanding lymphoma in young adults and its relevance to college students, so we can connect them with the client as a resource in those times of need when they arise,” Monigold said.

When creating tactics to support their campaigns, the teams went through an intense creative process to see their missions come to life.

“(Bateman Gold) cultivated a group environment where no idea was a bad idea. We wanted to allow for a full range of collaboration between all of us, so we could each make our mark on this campaign in our own way," Monigold said. "I think this helped us pull together some solid tactics because we were always supportive and hoping for each other’s ideas to find success."

The team’s tactics included very public displays of the campaign’s mission on the Kent State campus.

“We have success in broadening parts of our campaign to a wider overall audience because the Kent community is always so supportive of Kent State, and they meshed well when it came to interacting with those tactics,” Monigold said. 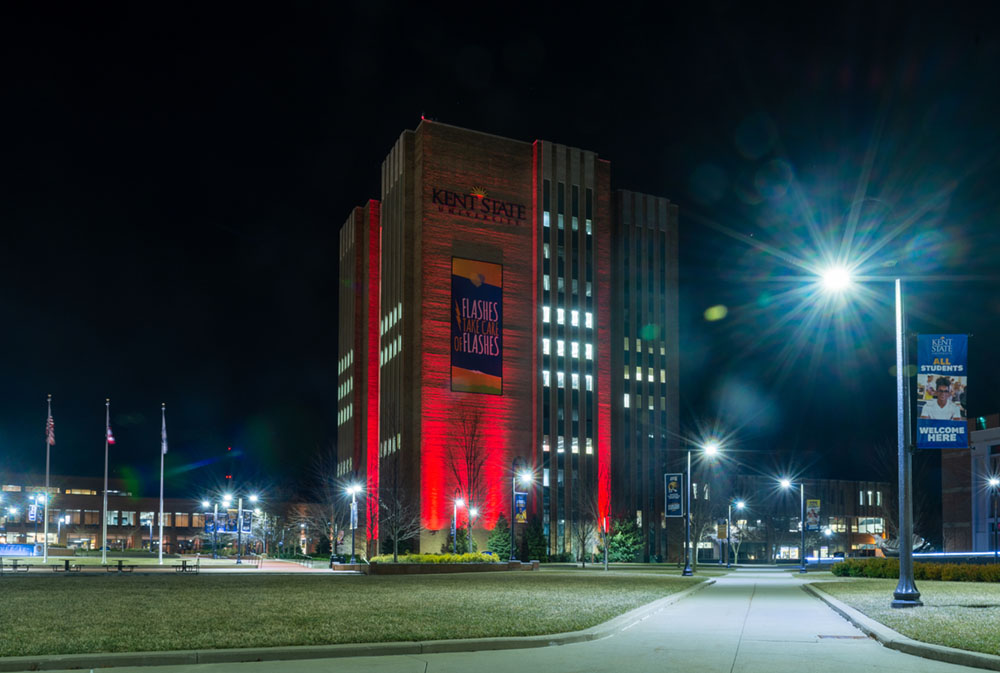 One of Monigold’s team’s main tactics is “Light it Red for Lymphoma,” where the team arranged for the Kent State Library to be lit up in red in support of lymphoma research each night during the week of March 7, 2022, as a core part of their “B.E.A.T. Lymphoma Week.”

“The ‘Light it Red’ campaign is something that the client has used before, and we saw the Kent State University Library as a perfect canvas for this LRF tactic to take shape through the lens of our community," Monigold said. "The library is a staple of our campus, and we believe lighting it red is a great way to bring Kent State and our client together.”

Haberberger’s team, Bateman Blue, focused strongly on medical students and partnered with organizations like the Committee for Student Clinical Research at NEOMED in Rootstown, Ohio. There, they hosted an event to educate students about LRF and motivate them to sign their pledge to erase lymphoma.

The team also partnered with the Public Health Student Alliance to host a “Medical Drama Trivia Night,”. The team saw more than a 50 percent increase in knowledge of LRF from attendees after this event.

Through both teams’ tactics, they revisit common goals to educate and inform individuals about lymphoma and the LRF.

“It’s important that people, especially people our age, understand the severity and prevalence of lymphoma, and that if we or someone we know ever ends up in that frightening position that there is an incredible organization out there who is ready to help,” Haberberger said.