Like many, John Smith grew up in East Liverpool and stayed in East Liverpool. Unlike many, however, he used his memories of his childhood friends, families, neighborhoods and experiences to write a book that is getting rave reviews beyond the city.

Smith is an adjunct instructor on the East Liverpool Campus where he teaches critical reading. His book, Song of the Tree Frogs, was released just days ago through major book companies, but it took years for the story to get to this point.

Using the pseudonym J. W. Kitson, Smith’s work of fiction was published by Morgan James Publishing of New York. Smith describes the book as realist fiction and a crossover novel that appeals to adults and young adults.

“The theme of the book is ‘love endures all things,’” he explained. “The story is sometimes emotionally-heavy, but shows that love is what heals.”

The story involves brothers Michael and Phillip, growing up with an abusive father. The father targets his anger and abuse toward Michael after learning that the boy may not be his true biological son. As the older brother, Phillip takes on the role of protector, and the dynamics of the family become strained.

Phillip is the narrator throughout much of the book, tackling issues such as child abuse, post-traumatic stress disorder and psychological abuse. But, the theme of faith is woven into the story and provides hope and healing for the brothers.

As an escape, the two brothers often sit on fallen trees in the woods, listening to the tree frogs, dreaming about better lives and how to get away.

Smith related that he wrote this story more than 10 years ago, but kept it to himself. “I threw it on a shelf and left it there until just a couple years ago,” he said. “Then, I was talking to a friend about how I loved to write and I told her about this story. She asked if she could read it, but warned me that she was busy and that it would take her a few weeks to get through it.

“Two nights later, she called me, crying her eyes out, and said, ‘John, you have to do something with this!’”

At that point, Smith said he began sending out query letters. Three agencies requested manuscripts, which he sent. One suggested that the story was too long and Smith edited 42,000 words from it. 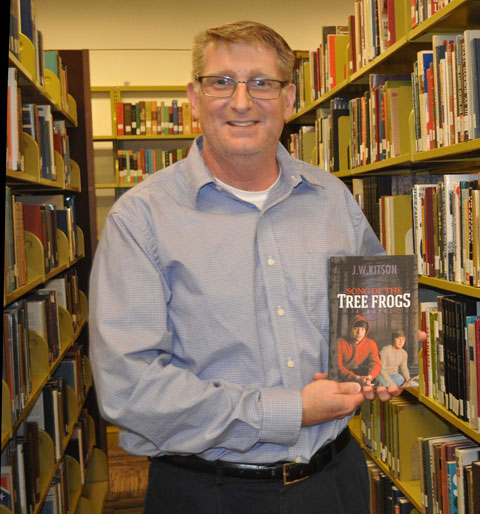 One publisher held the manuscript for seven months – which meant Smith could not send it to anyone else.

The manuscript was released back to him.

He waited some more.

Finally, he got a bite from Morgan James Publishing, a company that publishes books throughout North America, Europe and Australia.

“That almost never happened, though,” Smith related. “Morgan James receives 5,000 to 6,000 submissions every year, but they only publish 12 books of fiction each year and 100 non-fiction books each year. But, I got a call from the publisher who said he just couldn’t put down the book.”

Smith said that he used many memories from his childhood to write the book, as well as mental pictures he’s kept for years.

“When I write, I think of something, like a large house with white pillars, and up pops images from a local neighborhood. I’ll use those images as my descriptions for places or buildings. I do the same thing with characters,” he explained.

“Like the songs of the tree frogs…Both of my grandmothers loved sitting outside on their porches and I loved sitting with them. We would listen to the frogs at night and other sounds. We would just talk. I loved hearing their stories.”

Smith is in his 27th year as an adjunct instructor for Kent State, starting in 1991. “My professors at Kent State and my teachers at East Liverpool instilled in me this passion for writing. I want to pass this on to my students and show them that hard work pays off,” he said.

“This was a grueling process; it was challenging; and rejection letters are hard to read, but I can now see that everything was worth the extra effort and that things happened just as they were meant to happen.

Songs of the Tree Frogs is available in e-reader formats and through all major book chains. Autographed copies of the book are available at www.jwkitson.com, along with updates about events related to the book.

Locally, the book can be purchased at The Museum of Ceramics, Adrian’s Restaurant, Marty’s Pharmacy and the East Liverpool Community and Learning Center.