Situated between two trees and overlooking the Commons area on the East Liverpool Campus is a beautiful bronze bench with a plaque that reads: “A life that touched others lives on forever.”

The bench was unveiled and dedicated on Sept. 30 to honor the late Dr. Carole A. Barbato, a beloved professor of communication studies on the East Liverpool Campus who died in the spring of 2014 at the age of 64. 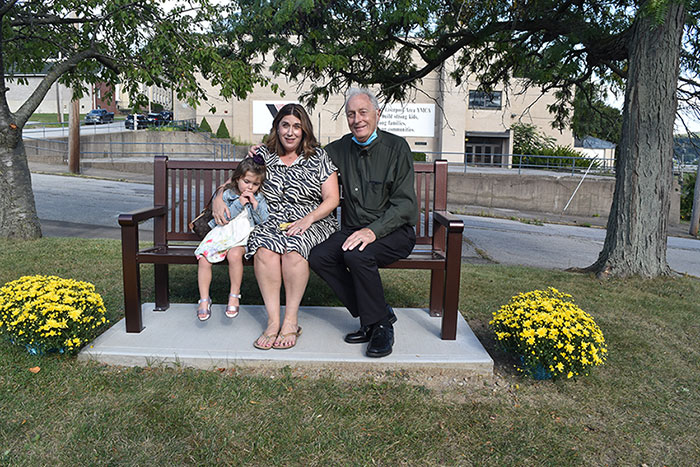 On hand for the dedication was her husband, Pat, along with her daughter, Alissa, and granddaughter. Joining them were former students, co-workers, peers and friends, some from the Kent Campus.

The bench dedication was originally scheduled to occur in the spring of 2020 during planned ceremonies for the East Liverpool Campus to observe the 50th anniversary of the events of May 4, 1970, on the Kent State Campus and to honor Barbato’s tireless efforts to preserve the history of that day.

Because of the COVID pandemic, however, the bench dedication was postponed, as was her recognition on the Wall of Fame as a Friend of the East Liverpool Campus.

Barbato was known as an energetic, engaged and dedicated teacher and was a favorite among students and staff. She was active and involved with student activities, community events and campus programs.

Those who knew her best noted that Barbato’s greatest professional accomplishment came on Oct. 19, 2012, with the opening of the Kent State University May 4 Visitor’s Center. She and her colleagues Laura Davis, Jerry Lewis and Mark Seeman earned the 2010 Ohio Historic Preservation Office’s Preservation Merit Award for documentation of the May 4, 1970, Kent State Shootings Site to the National Register of Historical Places. The group was instrumental in the creation of the May 4 Walking Tour and the May 4 Visitors Center.

Davis and Seeman attended the bench dedication and Wall of Fame program. 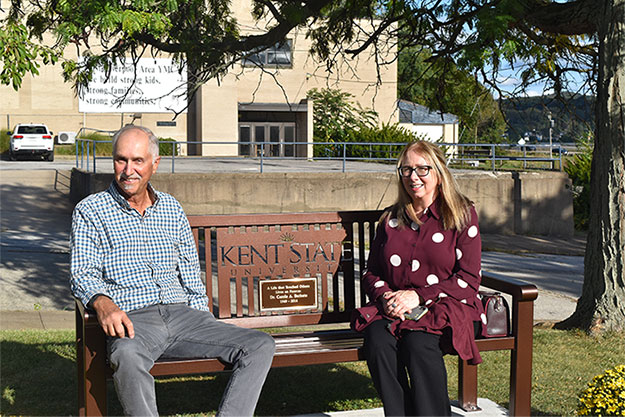 Throughout her professional life, Carole co-authored a book and wrote several book chapters and numerous journal articles in her field, including an article in the Journal of Loss and Trauma about the events of May 4, 1970. Her book, This We Know: A Chronology of the Shootings at Kent State, May 1970, “… gathers well-established information from recorded accounts - from the time they happened through what has been learned since.”

At a special celebration on the Kent Campus shortly after her death, it was stated that “Carole fulfilled a deep personal and professional commitment to honor those who were lost on May 4, 1970.”

It was also stated that Carole “served as a dedicated, engaged, tireless Kent State faculty member … who excelled as a teacher, author, university citizen and activist. She led countless students to success through the well-prepared and enthusiastic teaching of 21 different communication studies courses.” Her teaching career spanned 40 years.

Barbato is honored with a tribute wall in Taylor Hall on the Kent Campus. The display is near the main office for the School of Communication Studies on the second floor and just above the May 4 Visitor Center, which is housed in the lower level of the building.

The display shows her smiling face and states that “Carole fulfilled a deep personal and professional commitment to honor those who were lost on May 4, 1970. She helped place the markers where Allison, Jeff, Bill and Sandy, her childhood friend, fell.”

She is survived by her husband Patrick; daughter Alissa; and three grandchildren.

There are volumes that have been written and spoken about the late Dr. Carole Barbato. She has been praised for her teaching, her passion for life, her loyalty to Kent State and her love of her family. But, perhaps, the greatest statement about her is the quote that is displayed on the wall of Taylor Hall: “Carole made us better people and the world a better place.”

Cutline A: The bench dedicated to the late Dr. Carole A. Barbato.

Cutline B: The first to take a seat on the new bench was Patrick Barbato, along with his daughter Alissa and granddaughter.

Cutline C: Dr. Carole Babato’s colleagues (from left) Mark Seeman and Laura Davis who worked with her to preserve the history of May 4, 1970, on the Kent State University campus.