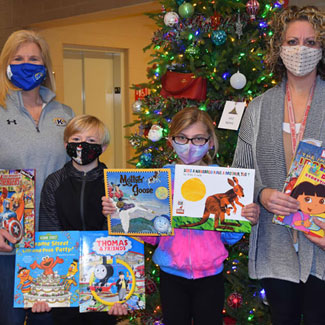 Over the last year, hundreds of children’s books were collected on the Kent State East Liverpool Campus that were intended to be handed out during the city’s annual holiday parade. When the parade was canceled this year because of the COVID pandemic, however, campus employees decided to find another way to distribute the books to local youngsters. 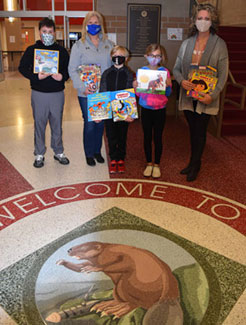 The North Elementary PTA included the books in gift bags prepared for each of its students that included pajamas, t-shirts and other items.

The books from Kent State were donated by employees, students, local businesses and the former Auxiliary from East Liverpool City Hospital or purchased with monetary donations.

Over the last five years, more than 5,000 books have been given to area children through Kent State’s Season’s Readings project.

Cutline A: The North Elementary PTA included a new book in each holiday gift bag prepared for its students. Shown are (from left) PTA volunteers Rachel Dawson and Amy Maltarich with Debbie Riggs, of Kent State at East Liverpool.

Cutline B: Showing some of the books donated to Beaver Local elementary students were (from left) Debbie Riggs of Kent State, students Brody Nign and Payton Smith, and Mrs. Brianne Hall.