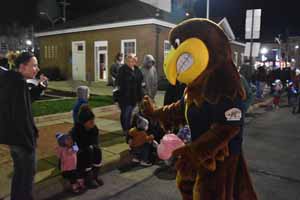 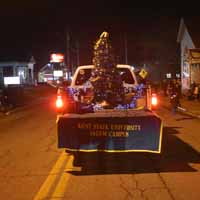 Students, faculty and staff joined forces on each Columbiana County campus to make a showing at the Salem and East Liverpool parades. Fortunately, the weather was perfect for each event and thousands of area residents turned out to watch.

During the fast-paced Salem parade, Flash and campus representatives greeted parade-goers while handing out candy and Kent State pencils. Flash is always a fan favorite! 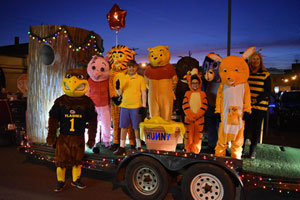 For the East Liverpool parade, the campus entered a float representing the 100 Acre Wood with all the characters (Pooh, Tigger, Eeyore, Piglet, Owl, Rabbit, Kanga, Christopher Robin and bees swarming the “hunny” pot) with, of course, Flash.

This year’s entry earned the Mayor’s Choice award and second place in the float category.

Carrying on its traditional “Season’s Readings” theme, the campus handed out nearly 2,500 books to children along the parade route.

Cutline A: Flash with his young fans in Salem.
Cutline B: Kent State in the Salem parade.
Cutline C: Season’s Readings from the 100 Acre Wood!
Cutline D: Dr. David Dees handing out a book to a young parade-goer.