As part of a university-wide initiative, the Kent State University campuses in Salem and East Liverpool are going green through a renewable energy project to provide solar panels at each location, resulting in cost savings and reducing the carbon footprint of Kent State. 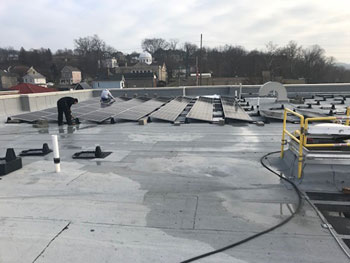 A year ago, the Kent State University Board of Trustees approved the solar panel project for six of its regional campuses as part of the university’s Energy Master Plan. The university publicly solicited proposals and TEN NINE Energy LLC was selected to lead the project. The project could produce up to 56 percent of the electricity required by the regional campuses annually while saving nearly $130,000 during the first year and more than $1.5 million for the duration of the 25-year contract.

Locally, work is underway on the Salem Campus to install ground-mounted solar photovoltaic panels on a plot of ground behind the main classroom building. In East Liverpool, work began this week to install rooftop panels on Purinton Hall.

There is no upfront capital expense to Kent State, but all electricity produced will be purchased at a negotiated rate with the developer.

The overall project will also benefit the utility electric grid. During the summer, with high electricity use because of air conditioning, the solar array will produce the most electricity and reduce the stress on the electric grid.

Aside from the Salem and East Liverpool campuses, solar panels are being installed on the Ashtabula, Geauga, Stark and Trumbull campuses.

“I applaud Kent State’s vision and the commitment to our environment demonstrated by this project,” noted Dr. David Dees, dean and chief administrative officer of the Columbiana County campuses. “Solar energy is a clean, renewable energy source and this is a way for us to be good stewards of the local environment.

On the Salem Campus 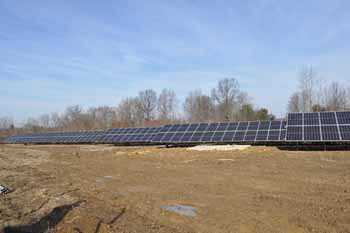 This project involves installing an array of about 1,560 solar panels and connecting to the campus electric system, producing enough clean electricity to serve 73 percent of the electricity for the campus. This is enough electricity to power 95 homes and translates to an expected cost savings of about $280,000 for the Salem Campus over the 25 years of the contract. 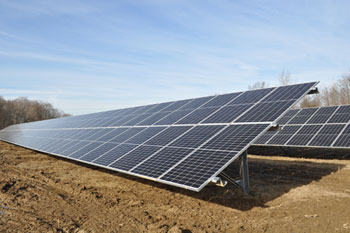 The project will reduce the carbon footprint by 617 tons of carbon dioxide, the main contributor to global warming. This is equivalent to removing 121 cars from the roads.

Once the solar array is completed, the land around the project will be planted with wildflowers and other native pollinators specifically selected to promote habitats that increase numbers of honeybees, butterflies and other native pollinators. This is intended to help restore balance to the ecosystem and can become an outdoor learning space for studying horticulture, botany, environmental sciences and other subjects.

This project is expected to be completed in the spring of 2021.

On the East Liverpool Campus

Because of limited open land on the East Liverpool Campus, a rooftop solar array of 232 solar panels will be installed on Purinton Hall and electricity will be extended to the building. The panels will be mounted on a weight ballasted system that does not require roof penetrations and will not compromise the new roofing system recently installed on the building.

The minimum 25-year solar electric cost savings to the East Liverpool Campus is expected to be about $40,000 with a reduced carbon footprint of 89 tons of carbon dioxide. This is the equivalent to removing 18 cars from roadways.

Cutline A: Crews begin assembling the solar panels on the rooftop of Kent State’s Purinton Hall in East Liverpool.

Cutline B: An array of solar panels being installed on the Salem Campus.