Live Chat
Students from South Range High School, with the name of Team Navionce, in Columbiana pose with their photo props after escaping from ESCAPE in a FLASH.

The circumstances are grim: Beloved Kent State University mascot Flash is stressed out and hasn’t been able to find the crucial student ID on exam day. You and your friends are the only ones who can help. Your group is frantically scrambling to find the lost ID, but time is running out before it becomes too late for Flash to take the exam.

This scenario might sound like something out of a Kent State mystery movie, but it’s actually the situation in the new escape room called ESCAPE in a FLASH at Kent State’s East Liverpool campus.

The Team Challenge, running until March of 2020, has been attempted by 12 high school teams so far, with only two teams having escaped. Bragging rights are not all the winning team receives; students on the winning team are also provided a scholarship for either of the Kent State Columbiana County campuses.

Smith worked with Paula Butler, business services account clerk at Kent State Columbiana County campuses, to develop a solution to Dee’s challenge. The pair, as well as lab assistant Megan Rodgers and IT analyst Jordan Steele, tossed around many ideas, such as a Shark Tank-type of competition and a robotics competition. 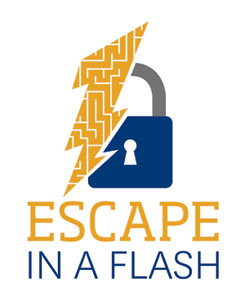 “Out of nowhere, Paula said ‘an escape room.’ I had never heard of an escape room before,” Smith said. “Our co-worker, Megan Rodgers, walked in and said she had done two or three of them before. She said, ‘Oh my gosh, it’s just so much fun,’ and that’s where it started. We took off from there.”

And ESCAPE in a FLASH was born.

The team involved in the escape room’s development brought items and materials from their own homes to set up the basics before being granted a small budget by the dean.

“We just begged, borrowed and brought from home most of the stuff in the escape room,” Smith said. “When we started we had no budget. Once we got to the point where it was starting to really come to fruition, our dean was like ‘Yeah, this is really cool,’ so then he gave us a small budget.”

Jeff Christopher, senior facilities manager, found the space for the escape room, worked with the architect’s office, and made sure that the escape room was complying with building codes.

Once it was set up over the summer, groups of high school students and employees came to test out the escape room.

“We did some tweaking and some modification based on how those sessions went,” Smith said. “Now we’re up and running, and we have a team challenge for area high schools.”

“I think it’s unique because it incorporates our local history and our Kent State history,” said Ashley Dunlope, admissions counselor. “It gives you this unique scenario of being a college student, you know, where high school students might not even consider that these situations might happen.”

When it was time to fulfill the challenge set forth by Dees, Dunlope sent out an email to teachers, superintendents and principals of local high schools to let them know about this new opportunity. Donald Bean, assistant director of Enrollment Management and Student Services, helped facilitate those strong connections with local schools.

Smith said that Shawn Golden, associate professor of information technology, and Steele were both key to creating the puzzles and piecing together the room’s technology. Using Rodger’s academic strengths and Steele’s support, escape room teams are able to experience the virtual reality lab.

ESCAPE in a FLASH is free for regional area high school students and teachers as well as Kent State students. All others can experience the escape room for $25 per person.

“We put that money back into the room,” Butler said. “A commercial room is only good for about nine months. We’re hoping to get two years out of ours. We think it’s going to live a little longer before we have to change it.”

Next fall, Smith said they’re planning on running another Team Challenge that will run until spring of 2021.

The team advises people who experience the escape room to “divide and conquer.” She said that all team members must participate by collaborating on what they’ve found and sharing that information.

Even after just a few months of being open to the public, the escape room has created some of Butler’s and Smith’s favorite memories.

“Last week we watched the students. It was one male and he was in the room with four females,” Smith said. “He stayed off to himself, and he solved one or two puzzles completely on his own and didn’t even go and tell the other girls that he had done it. He was so methodical and thoughtful about it, but yet he was a little shy about being with four other girls.”

The team can agree that it does not matter what educational background you have, when it comes to solving escape rooms, communication and problem-solving are key.

Those who are interested in attending the escape room still have time to prove they can solve it in the fastest amount of time.

The team, which spent several evenings at local escape rooms to learn from professionals and best practices, worked together for numerous hours building, gluing, painting, and arranging the escape room to make it the best it could be.