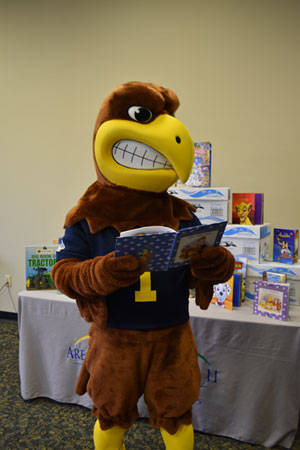 The donation included 364 children’s books and $650 that will be used to purchase additional books, which will be distributed to youngsters along the parade route of the East Liverpool Christmas parade in early December.

Joe Rossi, CEO of the Area Agency on Aging 11, made the presentation to Dean David Dees on behalf of the agency’s employees who contributed to the project with money and books.

“We are happy to give to a project that promotes reading and learning in such a fun way,” he said. “The kids can take something home with them that is meaningful and lasting.”

Last year, more than 800 books were handed out in the first few blocks of the parade. This year’s goal is to have enough books to give away through the end of the parade. The books are donated from area libraries, churches or local organizations, as well as from Kent State East Liverpool students, staff, faculty and administrators.

Donations of new or gently used children’s books are being accepted now through Nov. 27 and can be dropped off in the library in Purinton Hall. To make a monetary donation, contact Debbie Riggs at driggs@kent.edu

Photo: Joe Rossi, CEO of the Area Agency on Aging 11, presented a check and hundreds of books to Dean David Dees – and Flash. The donation will be used to help with the Season’s Readings outreach project that provides books to kids along the East Liverpool Christmas parade route.