A series of paintings by local artist Peggy Albert Mangano will be featured in an exhibit at the Kent State East Liverpool Art Gallery, located in the Mary Patterson Building. Titled “Flowers by Peggy,” the show opens with a reception on Thursday, April 12, beginning at 5:30 p.m. 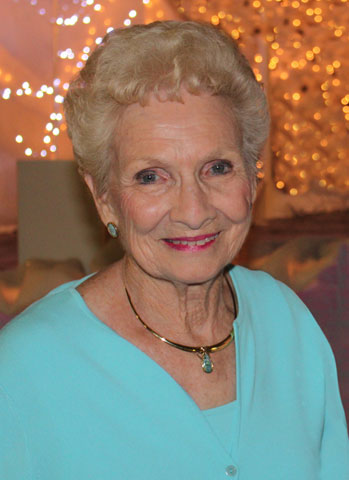 A highlight of the reception will be the unveiling of a painting that she is donating to the permanent art collection at Kent State East Liverpool. The featured work is called “Wild Irish Rose.”

Mangano was born and raised in Nebraska and graduated high school in Seattle, Wash.  She was trained as an educator and speech pathologist and moved to the East Liverpool area in 1957. She spent much time teaching, volunteering in the community and raising her three children, but she always had a deep interest in art and illustration.

In the 1970’s, Mangano took a college art class at Kent State East Liverpool, taught by a “gifted teacher,” Al Pomplas. Through his encouragement, instruction and criticism, Mangano discovered her gifts for artistic expression.

She was a prolific artist in the 1980’s, producing works of sculpture, stained glass and paint. Mangano produced numerous paintings of landscapes; however, she is best known for her series of large canvas paintings of individual flowers.

Mangano’s flower series captures her passion for realism and attention to the minute details of the world around her. At the same time, her flowers are not mere imitations of nature; they create their own sense of texture, depth and complexity.

The “Flowers by Peggy” exhibit will be displayed in the Art Gallery through May 14. The gallery is located on the second floor of the Mary Patterson Building, 213 E. Fourth St., and is open on weekdays from 8 a.m. to 5 p.m.