Kent State University at East Liverpool recognized the academic achievements of several students during its annual Wall of Fame and Honors Banquet, while also honoring three individuals for their contributions to campus. 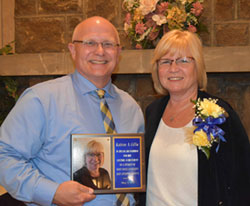 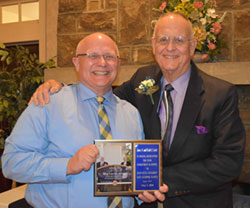 James (Jim) A. Locke III and Keith E. Locke each received the Friend of the Campus Award, recognizing their generous donation of the former home of their parents, James and Margaret Locke, to the Kent State East Liverpool Campus. Now known as The Locke House, the home serves as a real-life simulation and training site for occupational therapy assistant students.

Frank Dawson accepted the awards on behalf of Jim and Keith Locke who were unable to attend the event.