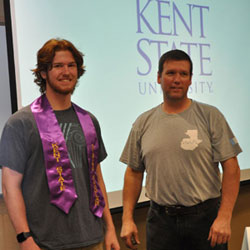 As seventh graders, 15 local students were directed to the Rising Scholars program (formerly known as the Rural Scholars program) because their teachers detected something special in each of them. Now, six years later, they are each ready to move onto the next phase of their lives: college, trade school, the workplace following completion of the Kent State Columbiana County Rising Scholars program.

A graduation celebration was held on the Salem Campus to recognize members of the Rising Scholars program who are each graduating from their respective high schools this spring. Because of the pandemic, each graduate was recognized in a “private” ceremony with just family, a mentor and a few program administrators.

The graduating scholars include: 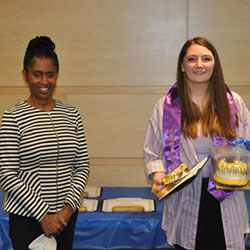 The Rural Scholars Program is designed to offer local first-generation college-bound students and their families the knowledge and social support needed to succeed at a university. The goal is for each student in the program to complete a post-secondary education with credentials necessary to succeed in his or her career. Students are chosen by their schools on the basis of their academic and leadership potential.

Kent State Salem and East Liverpool students serve as mentors to the younger scholars. Each mentor is a first-generation college student from Columbiana County with a strong record of academic success and a desire to serve the community.