Alexis Bartee is a senior, majoring in insurance studies at Kent State University at Salem. She decided to pursue this particular degree after she began working at an insurance company in Akron in 2012. There, she helped people plan their insurance needs and guided them through the process. 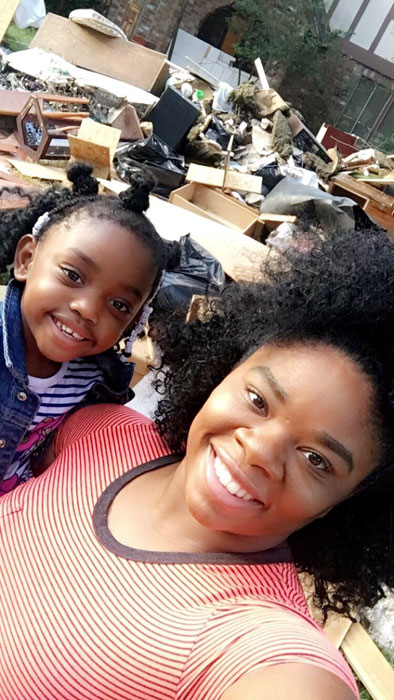 In August, however, Bartee was in Texas caring for her elderly grandparents when Hurricane Harvey hit and, unfortunately, she now views the world of insurance from a whole different vantage point. As of mid-September, that vantage point is a shelter housing more than 300 people, of all ages, who were displaced because of the storms.

Despite her situation, however, she is continuing her studies and is currently enrolled in five classes. Her goal is to graduate by next summer.

Keeping up with her assignments and coursework has not been easy for Bartee, because all of her text books and lap top were destroyed in the floods that resulted from the hurricane. Fortunately, an email message explaining her plight to one of her instructors, made a big difference.

As she related, she traveled to the Houston area in July to help her grandparents – 88 and 89 years old – unravel issues related to medical concerns. Bartee never expected to be in Texas two months later, much less living with hundreds of other people in a shelter.

“My visit was supposed to be a temporary thing,” she said, “then the storm hit. We listened to the weather reports, but there were so many and we really didn’t know what to expect and when to expect it. It wasn’t the hurricane winds that ruined their home. It was the rain and the flooding.”

She said that as the rains began, she and her grandparents did not panic initially. But, within a few hours of the rains, Bartee said she noticed the street outside their house was beginning to flood.

“It was so strange! Being from Ohio, I just expected the water to drain and run off somewhere. But, then I realized that there was nowhere for the water to go. After a few more hours, the water was deeper and I convinced my grandparents that we should leave,” she said.

Using her grandparents’ car, she drove them and her four-year-old daughter, Mckinley, away from the neighborhood. Someone had suggested they go to the location where they now “live,” but she never expected to stay more than one night.

“I honestly thought that we would spend the night, get up the next day and drive back home. When that didn’t happen, I thought that it would be just another day or two,” she continued. “But, here we are, three weeks later, waiting to find out where my grandparents will be living.”

Because they left not knowing that they would be displaced for so long, Bartee and her grandparents did not gather many personal belongings – including her books and lap top. 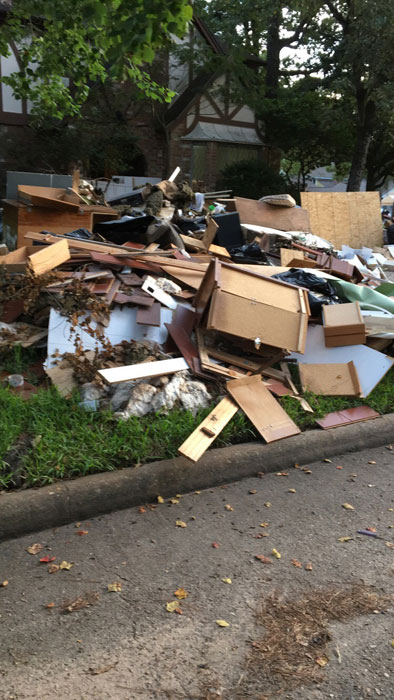 Determined to not let this storm push her off track to graduate, Bartee soon contacted Lynette Rawlings, associate lecturer and coordinator of the criminology and justice studies program for the Kent State Columbiana County campuses, since she was in one of her online courses.

The timing could not have been more perfect. At the Salem Campus, Rawlings shares an office with Tim McFadden, academic program director for business and the insurance studies program. McFadden also serves as Bartee’s academic advisor. The two were in the office together when Bartee’s email reached Rawlings.

After hearing her story, Rawlings and McFadden reached out to campus administration and the Enrollment Management and Student Services office and, in no time at all, arrangements were made to replace the damaged books.

“I can’t thank everyone enough for the help they gave me with this,” Bartee said. “Everyone is being so helpful and my instructors seem to understand my problem. I don’t know how much longer I’ll be in this situation, but I’m determined to finish on time.”

Still without a laptop, she often borrows a laptop from another woman at the shelter for quizzes and homework, while using her phone to check Blackboard and emails.

While her grandparents continue to wait for word on how they will be helped and where they will live, Bartee remains by their sides. They did not have flood insurance, so they are in a sort of void when it comes to relief and options.

“They are depending on me and I just can’t fly back to Ohio and leave them here,” she said. “The situation could be a lot worse, but it’s not easy as it is. There is so much red tape and so many unknowns. But, I just can’t leave Texas and not know what is going to happen to them.”

Bartee explained that the shelter is “one giant room” with more than 300 people in it. They include babies, toddlers, teens, adults and senior citizens. There is no privacy, she explained, and tempers often flare.

“Everyone really is trying to make the best of the situation, but when you get that many people in a room, for that long, tension does build up. It’s very emotional,” she said. “I’m one of the lucky ones because I still have a home in Ohio and I didn’t lose everything. But, there is just so much loss here.”

As an insurance studies student, Bartee said she has learned a lot by living through this disaster, especially the emotional toll such events take on those affected. She knows this experience will help make her a better insurance employee.

“I’m going to tell everybody to not take anything for granted! They have to get insurance for everything, no matter where they live – things like floods, earthquakes, tornadoes, hurricanes,” she said. “And it is so important to know exactly what you have covered. Take pictures or video of everything you own. Keep good records.

“Living through this will definitely help me relate better to clients who go through losses and disasters. I’m learning a lot through my insurance classes, but I’ve learned a whole lot more by living through this situation.”

Photo A: Alexis Bartee and her daughter, Mckinley. Behind them is her grandparents’ flood-damaged home.