The third Kent State County Classic basketball game took place Jan. 29, when the East Liverpool Potters hosted the Salem Quakers in a battle of the borders.  Kent State’s Columbiana County campuses welcomed fans from both ends of the county for an exciting match-up, with activities throughout the game. 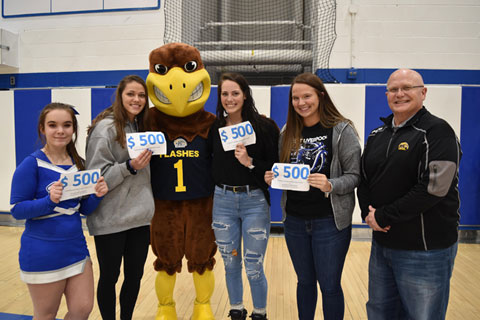 At the end of the game, the East Liverpool Potters took home the traveling plaque after defeating the Salem Quakers, 70-47.

Cheerleaders tossed out t-shirts to fans and four students were each awarded a $500 scholarship after participating in a balloon-busting activity at halftime. Drawings were held for a Kent State gift basket, and two sets of PowerBeats headphones (courtesy of Pepsi), while Flash entertained fans throughout the game.

The scholarships were awarded to Ellie Davidson and Lydia McKee, of Salem High School, and Jaiden Goodwin and Terran Stacey of East Liverpool High School. 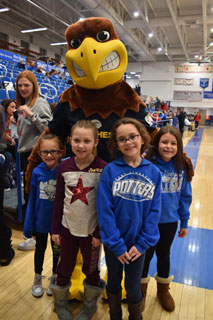 Photo A:  Dr. David Dees (far left), dean of the Kent State Columbiana County campuses, along with Flash, presented the County Classic traveling plaque to the East Liverpool Potters, who won this year’s contest with a 70-47 score over the Salem Quakers.

Photo C: As always, Flash was a fan favorite!