Kent State University at East Liverpool welcomes the public to hear author and historian Alan Fitzpatrick during a free public presentation at 3 p.m. on Wednesday, Oct. 17, in the library, located on the second floor of Purinton Hall. He is the author of four non-fiction early-American history books about the conflict between Native Americans and colonials during the tumultuous period of the late 1700s. 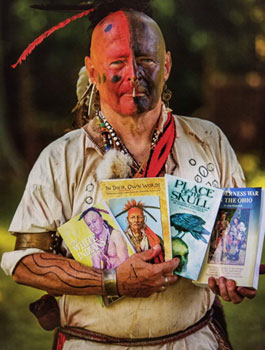 Fitzpatrick was born and raised in Saskatchewan, Canada, where he was friends with many children who were descended from indigenous people. He relocated to West Virginia in 1973, graduated from Kent State University with a degree in psychology and was employed as a classifications counselor at the West Virginia Penitentiary in Moundsville.

When he moved to the Ohio Valley, he made Wheeling his home and became fascinated by the early frontier history of the Upper Ohio Valley. While learning about the local history of native tribes and he found that they are the “lost people of America” and, since then, has been dedicated to telling their stories.

During his research, Fitzpatrick noted that he could not find an accurate history written by a local tribe member, so he traveled to Oklahoma, where the Ohio Valley tribes relocated, to do first-person research.

His book, White Indians, offers accounts on the vast numbers of “white people” who voluntarily joined the native tribes as official members following their eviction from the Ohio Valley.

In his presentations, Fitzpatrick dresses as a late-1770 white man who voluntarily joined the Wyandot tribe and was adopted as a member. He dresses in “trade clothing” and is also prepared for war with black and red face paint.

In 1997, Fitzpatrick was a founding member of the Fort Henry Days, a yearly living-history commemoration and re-enactment of the 1782 last battle of the American Revolution held each September at Wheeling’s Oglebay Park.

This presentation is sponsored by the campus’s Culture Fair Planning Committee and the KSUEL Enrichment/Honors program.