It’s difficult to find information about the late William (Dan) Southall on the Internet, and that’s a shame. He was a brilliant student, artist and educator who stockpiled his own art in a humble way, leaving behind a collection that included ceramic sculptures, paintings, sketches and drawings.

On loan from his family, several of Southall’s ceramic pieces are now displayed in the lobby of the Mary Patterson Building and on the second floor in Purinton Hall in observance of Black History Month.

Southall grew up in East Liverpool, in a house on Garfield Street that overlooked downtown, and began creating art pieces at a young age. According to an article published in The Review newspaper (written by Fred Miller for the Jan. 22, 2006 edition), Southall began entering art shows at the Cleveland Institute of Art as a young man in the mid-1940s and won awards for categories such as modeling, mechanical drawing, watercolor, life drawing, anatomy and sculpture. 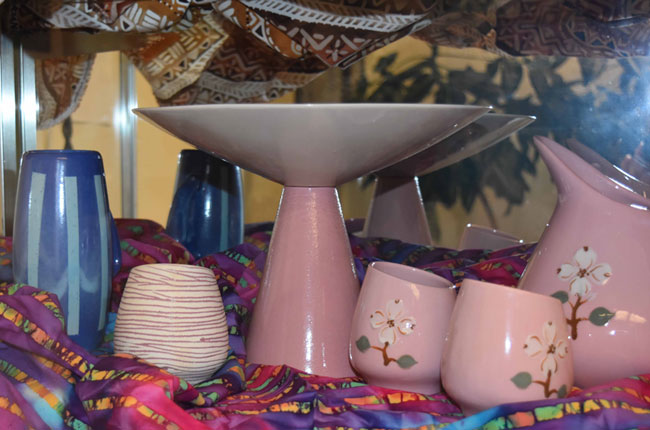 Before earning his graduate degree, however, Southall was named director of the Ceramics Department at the Tuskegee Institute in Alabama in 1951, where he developed a program to produce high-quality ceramic art objects to be marketed, while training students in ceramic art.

The art pieces were sold in the Tuskegee bookstore and at department stores in Birmingham and Montgomery, Alabama.

In 1958, Southall began a 21-year career as an art teacher in the Detroit public schools.

Throughout his life, he continued to create art while displaying his works in shows in Detroit, Atlanta, Cleveland and at the Kent State East Liverpool Campus. Some of his watercolors depicted scenes from the East Liverpool and Wellsville areas.

Southall died on May 28, 2004, in Detroit. It is reported that after his death, his family “hauled truckloads of artwork back from Detroit.”

According to the newspaper article cited above, the Southall family can trace its lineage back to ancestors who came to East Liverpool in the  mid-1800’s and settled in the area now known as Glenmoor. The family home was once part of the Underground Railroad, helping slaves escape to Canada.