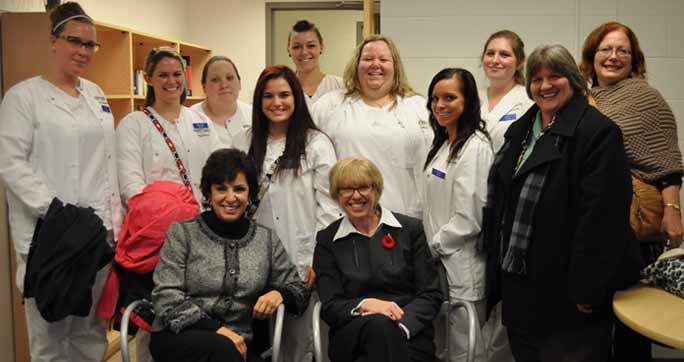 Near the end of the 2013 fall semester, a group of nursing students, faculty and administrators from Kent State University at Salem traveled to Canada as part of a cultural exchange program and networking opportunity.

The eight-day trip was part of the curriculum for students in the transcultural nursing and healthcare class. It was organized by Dr. Mary Lou Ferranto, director of the Salem campus nursing program, and Lorene Martin, assistant professor of nursing for Salem.

The Kent State contingent was welcomed and hosted by Noor Din, founder and chief executive officer of Human Endeavor in Vaughan, Ontario. He and his staff developed a detailed and non-stop agenda that provided a diverse range of experiences for the students.

Before the students could even unpack and settle into their hotel rooms, they found themselves at Human Endeavor headquarters raking leaves, trimming shrubbery, cleaning out flower beds, digging, turning dirt and preparing a community garden for winter.

From that point on, the students and instructors never seemed to stop moving. They attended an Indian dance program; visited a Hindu temple; and toured the Ahmadiyya Muslim Mosque where they later participated in a roundtable program during a community dinner.

Students also worked at an adult day program for seniors with Alzheimer’s, dementia and stroke conditions; spent two days with nursing students and faculty at York University; attended a Healthy Communities conference in downtown Toronto; and met with staff from the Yellow Brick House, a women’s shelter near Toronto.

The trip to Canada took place just weeks before Obama Care was set to be implemented in the United States; therefore, a meeting was arranged with the president and CEO of Mackenzie Health Hospital in Richmond Hill, Ontario. There, the nursing students received an overview of a publicly-funded hospital system in a country already using a form of socialized healthcare.

They also met with the leader of the Punjabi Community Health Center, who explained details about culturally-appropriate addiction, mental health and violence prevention programs for the Punjabi community in that area.

Putting their nursing skills to use, the students conducted blood pressure screenings and diabetic foot exams at a community center in Vaughan, and gave oral presentations about foot care and nutrition. The audience members were mostly South Asian women, many of whom performed a traditional dance for the Kent visitors.

Because Toronto is considered by many to be the most multi-ethnic city in the world, the students and staff were able to experience cultural diversity everywhere they went. People from every country in the world live in Toronto and at least 200 languages are spoken there. Each year, almost half of all immigrants to Canada settle in the Greater Toronto Area.

“When most of us think of Canada, we don’t think of it as a country with such a wide range of cultures,” Ferranto noted. “But, our students were immersed in cultural diversity every day, everywhere they went. I teach cultural humility to my students and I hope that they understand that every culture is special and is to be respected.

“As we take care of our patients,” she continued, “I want these students to think about what our hosts have taught us, and just take that to the bedside and take it to the patient. They can each make a big difference in someone’s life.”

To enhance the cultural experience, Din included a walking tour of downtown Toronto and its mall; hot yoga; social events at the local community center and visits to a variety of ethnic eating establishments.

Din founded Human Endeavor in 2004 to improve the health and socio-economic conditions of the community using nontraditional and innovative methods. Over the years, Human Endeavor has developed and expanded services to include health and wellness programs, social enterprising, a community transport system, a seniors’ well-being program, green energy and solar panel installations, gardening, environmental programs, training and research.

Human Endeavor is now widely recognized as an innovative leader of providing solutions to social challenges, and has received numerous provincial and national awards in Canada.  Its HOPE Project (Healthy Outcomes of Preventive Engagements) received the 2010 Innovation Award from the Ontario Ministry of Health and Long-Term Care and the Ontario Hospital Association for its evidence-based practice through a program for more than 600 South Asian seniors.

For his work with Human Endeavor, Din received the 2012 3M Health Leadership Award, which honors leaders who have a significant impact on the health of their community in Canada. He also was named the City of Vaughan’s Civic Hero in 2007.

The plans for the trip to Canada began shortly after Ferranto and Martin met Din at a conference more than a year ago. Since then, a solid working relationship was built and they are planning to partner on future projects in Canada, as well as in the Salem area.

To see some of what the students and staff experienced, go to the Kent State Columbiana County Facebook page. To learn more about Human Endeavor, visit www.humanendeavour.org.

What students had to say about their trip to Canada and the people they met:

Haeli Todd: “This trip opened my eyes to a lot of the different cultures. I learned that we have lots of biases inside of us, but (they) blew it all out of the park. I’ll remember this for the rest of my life.”

Brittany Gisler: “It was so great. I’ll remember how welcoming and gracious you all were. … It’s been so wonderful. I honestly have learned so much about cultures. I came into this with certain expectations, what I thought of things, and they completely changed the entire time I’ve been here. It’s opened my mind to everything. It’s been great.”

Sabrina Christofaris: “It’s a wonderful experience. In all of my travels, I’ve never met such warm people or learned so much.”

Alisha Fata: “This opened a whole new side of humanity and caring for everybody. And it was very inspiring. …I have learned so much through this experience. It was so warming to go into each new day and getting so much from it. It was so rich in education and culture, and I know it’s something we’ll all cherish forever.”

Tiffany Faltinoski: “I feel (our hosts) all took time to get to know us. I didn’t feel judged. Being here felt warm and welcoming. …I have definitely learned a lot and I will take a lot with me.”

Kerry Crum: “I’ve learned so much about others, but they helped me learn more about myself.” 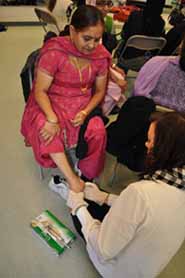 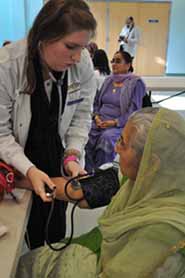 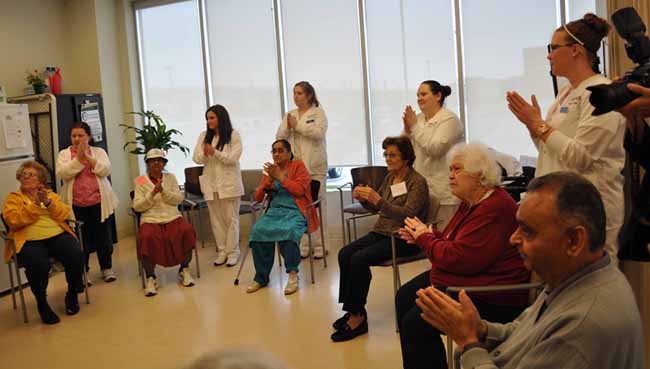