Congratulations are in order for MAEGAN RICHARDS who received the 2020 President’s Award of Distinction! 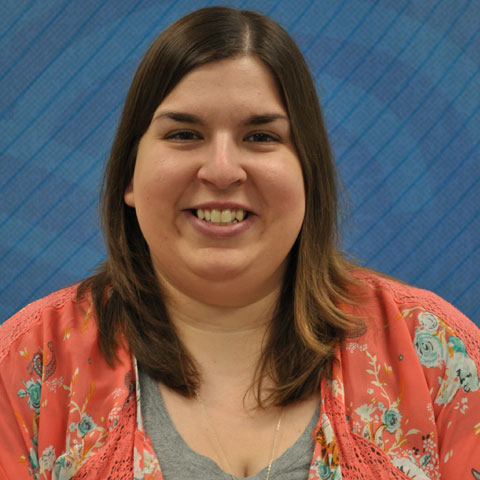 Richards is the Academic Learning Commons coordinator for the Salem and East Liverpool campuses. She works tirelessly and non-stop to make certain our students on both campuses are equipped with computers, technology, resources and personal contact to help them succeed. She truly puts students first every single day.

She earned a Bachelor of Arts in English in 2009 and a Master of Library and Information Science in 2011, each from Kent State, and has been a full-time employee on the Salem Campus since September 2011.

Kent State University President Todd Diacon noted that his office received nearly 200 nominations from employees’ supervisors, peers and colleagues throughout the eight campuses. Only a very select number of staff members were chosen to receive this honor.

“This prestigious honor recognizes your exceptional performance and value as a member of our university community,” Diacon wrote to Richards. “As I reviewed the nominations, I was touched to see so many examples of employees like you who demonstrate in your day-to-day efforts the university’s core values and that Flashes take care of Flashes.”

In 2016, Richards received the Staff of the Year Award for the Salem Campus, recognizing exemplary service to the campus. It, too, was based on nominations from students, staff and faculty.

“Maegan has matured from a student and student worker on our campus to one of our most valued employees,” noted Dr. David Dees, dean and CAO of the Columbiana County campuses. “As we learned to navigate through the COVID pandemic over the last several months, Maegan NEVER stopped. She was very proactive in finding ways to reach out to students and faculty so that we could continue delivering on our promise of providing a quality education for each of them, even in a remote environment. I could list several examples of how she went above and beyond her job duties, but that list is almost endless. Her impact on our students and our campus is astounding and quite worthy of this recognition.”

Dr. Rachael Blasiman, associate professor of psychology and chair of the Faculty Council on the Salem Campus, offered a congratulatory note on behalf of several faculty members who nominated Maegan for this award:

“Maegan Richards wears many hats at the Salem campus - she leads our Academic Learning Commons; she is a valuable member on multiple campus committees; and she assists our academic tutors,” Blasiman stated. “And she wears each of these hats with indefatigable cheerfulness, professionalism and admirable ability. Maegan is there to help every student and faculty member who wanders into her office, often going beyond her job description to help others. She has been instrumental in evolving our library to meet student needs and to promote undergraduate research. Maegan rises to every challenge and we are lucky to have her as a member of our campus community. I am so pleased that she has been recognized for her achievements by Kent State University; it is certainly a well-deserved honor!”

Read more about her recognition