Kent State University at Salem recently presented the Friend of the Campus Award to Mark Seigal, owner of the Salem Giant Eagle, the highest honor presented annually to non-students. It recognizes community members who work to better the campus through their time and talents over the years, and who embody the quote by Helen Keller: “The welfare of each is bound up in the welfare of all.” 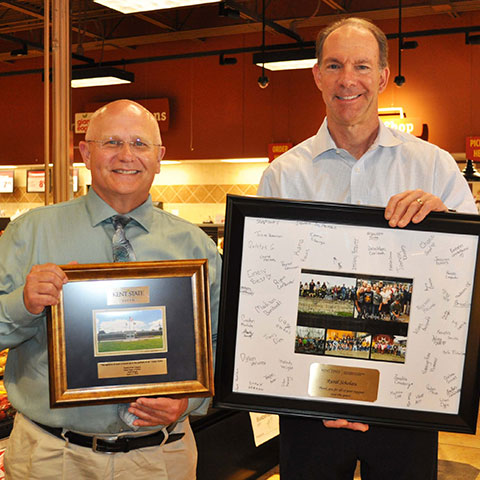 He practiced law for five years in the Washington, D.C., area before moving with his wife, also an attorney, to the Pittsburgh area. Seigal now commutes daily to the Salem store and has become a leader within the community.

Seigal is a generous supporter of the Rising Scholars program on the Columbiana County campuses, donating numerous meals for the students during workshops and events over the last 10 years.

“It just makes sense to support education because it is the key to everything and education makes a difference in every life,” he said. “Starting this support for students at any early age is critical, but it’s just as important to be a constant supporter for those kids as they continuer their journey through school. My dad showed me that we get back ten-fold what we give out. This award really recognizes his legacy and what he instilled in me.”