For students in any healthcare-related field of study, the hands-on learning that takes place in actual clinical settings is critical to their overall educational experience. For Mary Kenney and Paris Yanno, that experience was greatly enhanced because of six weeks spent in Nicaragua, applying what they learned as students.

Kenney and Yanno each graduated this past summer from the occupational therapy assistant program on the East Liverpool Campus, but not before becoming part of the Jessie F. Richardson Foundation’s 2017 Occupational Therapy Fieldwork Experience. They, along with six other students from universities across the United States, worked with elders in hogars (homes) and led activities such as assessments, adaptations and therapy projects. 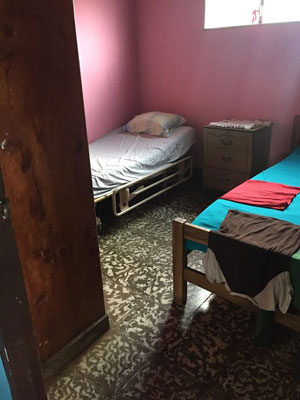 During their first week in Nicaragua, Kenney and Yanno lived in separate homestays in Masaya to complete a week of intense Spanish schooling.

“The electricity was very flaky and there was no running water,” Kenney said. “We were right in the middle of the jungle!”

Yanno’s experience was similar during her first week. “The first week, we stayed with families who were living in poverty, so there was no running water or real toilets. We took bucket showers and ate vegetarian-style, since meat is expensive,” she related.

Over the following five weeks, the students stayed together in Jinotepe and worked in different hogars – or homes, similar to senior living facilities in the U.S.

Kenney, and another student from Oregon, worked at Hogar de Ancionos Dulce Refugio, or Home of the Elderly, Sweet Refuge. The facility was in Diriamba, a city about 20 minutes away from her living quarters.

She said the facility itself presented some challenges to her work. Aside from not having any prepared patient evaluations to use, Kenney said the physical layout of the hogar was full of obstacles, such as four-inch ledges in the showers, cement blocks in rooms and step-up entrances.

“We were the first ever OT students to go into the Diriamba home, so our plates were pretty full! We were attempting to complete a lot of work in a short amount of time,” Kenney related. “On a day-to-day basis, we would help with activities of daily living – bathing, dressing, eating – then compete two to three individual sessions with the residents to focus on cognitive functioning, fine and gross motor skills and following commands. I was surprised and overwhelmed by how much the caregivers truly care about the residents. The quality care that they give is the absolute best they can do with what they have been given.”

Yanno was assigned to Hogar de Ancianos Dr. Agustin Sanchez Vigil. “We worked with older adults in a home and did activities such as group exercises and craft groups,” she explained. “We also performed evaluations and cognitive assessments with each resident and placed them into groups based on their cognitive levels. I was not expecting the facilities to be as nice as they were, honestly. They weren’t like American facilities, but there were handrails, walkers and a couple of wheelchairs and shower chairs.” 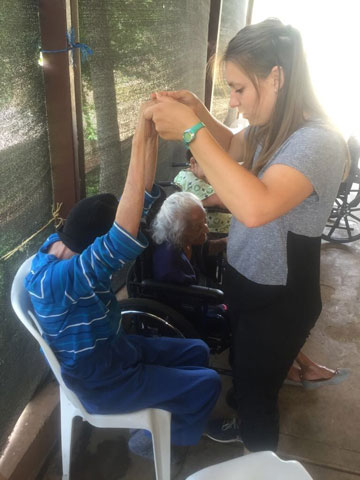 At each facility, the students donated supplies and created manuals for caregivers to use once they left. Yanno explained that the manuals listed various activities the caregivers could use with the residents, and the students taught staff members how to grade each activity and each resident, based on the individual level of cognitive understanding or ability to complete the activity.

“We created the activity manuals and donated supplies so that our work would be sustainable after we left,” Yanno explained. “Now, everyone can participate at some level, no matter their cognitive levels. The thing about occupational therapy is that it is sustainable in all places and all cultures. It can adapt.

“This experience taught us how to adapt our treatment plans to the needs of Nicaraguan people,” Yanno continued. “Rather than trying to ‘Americanize’ their facility, we were able to make OT relevant to them, by helping them to be more independent and improve their quality of life.

Also, I think it was a big adjustment (for me) to get used to their culture of being really laid back and not on a time limit. In America, especially in healthcare, people are always on a time crunch and productivity matters. In Nicaragua, that doesn’t matter, because they are focused more on relationships and spending time with people rather than a schedule.”

Once Kenney and Yanno were accepted into this study abroad program (they had to apply and be interviewed), they were required to develop a plan to improve their Spanish speaking skills, as well as study Nicaragua’s history and culture.

“Politics is a common topic there and the residents we treated had lived through times of great political unrest,” Yanno explained. “The language barrier was an obvious challenge. There were so many times when I would want to say something but didn’t have the words, or it was difficult to understand others.”

For the majority of their time in Nicaragua, Kenney and Yanno lived in a homestay with a host family that included a grandmother, her sister, her daughter, son-in-law and 2-year-old son. “We were in an upper class area with a fairly large house,” Kenney noted. “And we had a shower and built in water heater!”

While the day-to-day work at the hogars was tasking and demanding, the weekends were filled with excursions that allowed the students to experience the culture and climate of Nicaragua.

“During the week, it was pretty much all work, even after hours at the hogar,” Yanno said. “On the weekends we traveled to different cities and had many adventures. We went to the top of an active volcano and looked down inside, went kayaking in a crater lake and we hiked Mombacho – a volcano that is so high we were, literally, in the clouds! We shopped, went to the beach a couple of times, surfed and we went volcano boarding down an active volcano. So many things!” 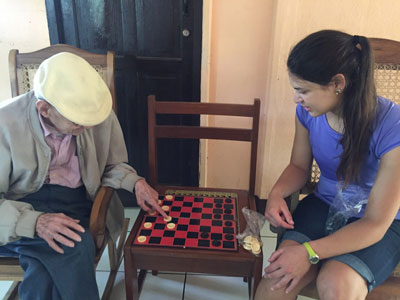 Both Kenney and Yanno said that they would welcome the chance to return to Nicaragua, but that the experience also made them consider taking their skills to other parts of the world.

“Nicaragua was incredible! We were shown so much love. We were able to see and learn about a different culture and way of life, and we were able to apply our knowledge of OT to a group of people who had never heard of it,” Kenney said. “I love learning about different cultures and making relationships with people all over the world. I learned two major things. One: remain grateful in everything. Two: use your voice. When I was working with my residents, I couldn’t say everything I wanted to because of the language barrier. Now, I have my voice and I am going to use it!”

Yanno agreed. “I would love to return to Nicaragua. It is a beautiful country, with beautiful people. I would like to travel in the future internationally and do OT in different places to help the people. The biggest takeaway from this experience is to love people intentionally and love them well – no matter what obstacles lay in front of you. Don’t let a cultural barrier intimidate you. Embrace all cultures and learn from them. That’s how you increase quality of life.”

Kenney and Yanno are the first OTA students from the East Liverpool Campus to participate in an international learning experience, but they may not be the last.

“I am currently researching other international fieldwork sponsors and providers to find the best fit for future students who may be interested in this type of a once-in-a-lifetime experience,” according to Nina Sullivan, academic fieldwork coordinator for the OTA program at Kent East Liverpool. “The faculty and staff were honored to be part of this program and very excited to see the students be able to go to Nicaragua and gain this invaluable life-changing experience. It highlights the exceptional qualities of our program and the profession of occupational therapy.”

Kenney and Yanno will share their experiences during the Ohio Occupational Therapy Assistant conference in Dayton on Nov. 4 when they present “Expanding Our Horizons: An OTA Level II Fieldwork in Nicaragua.”

Photo 1: Paris Yanno (left) and Mary Kenney (right) on top of a cathedral in Leon, Nicaragua

Photo 2: Board riding down Cerro Negro, an active volcano in Nicaragua

Photo 3: Mary Kenney working with a resident to improve range of motion

Photo 4: Paris Yanno using a game of checkers as therapy for an elder resident

Photo 6: A resident room within a hogar in Diriamba